Let's take a walk back in time and learn about the colonists who came to America voluntarily for different reasons. This printable collection of Colonial America worksheets, maps and charts for students of grade 4 through grade 8 help teach an assortment of skills through activities such as locate, label and color the 13 colonies and colonial regions on a map, compare the American colonies, name their capitals, match the colonies to the founders, learn about the colonial American jobs and many such; to address the thinking abilities of children. Set start your exploration with our free worksheets! 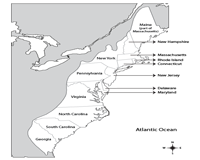 The ability to read a map is a skill that must be learned and requires considerable time and effort. This printable map vividly displays the geographical regions of the 13 colonies along with their names and colonial divisions. 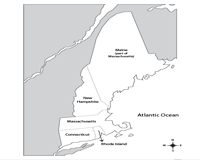 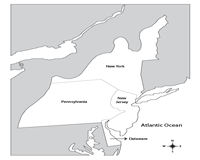 Visualize the location of the Middle Colonies in relation to one another. Quite literally this map pdf helps children figure out the Middle Colonies of Pennsylvania, New York, New Jersey, and Delaware that were created to be more religiously tolerant. 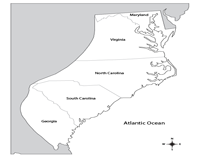 Maryland, Virginia, Georgia, North and South Carolina became the historical core of the Southern United States. Figure out the location of each colony and develop map skills and insist on comprehending, rather than just observing the map. 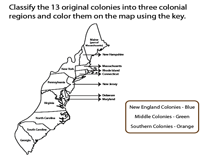 Put comprehension skills to test and divide the thirteen original colonies into three colonial regions, identify the New England, Middle and Southern Colonies and color them using the color key. 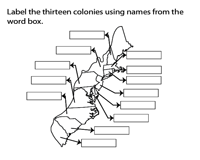 Build 4th grade and 5th grade children’s spatial reasoning skills and help them locate the thirteen colonies and label them using the names from the word box in this printable geography map activity worksheet.

Locate and Label the Colonies 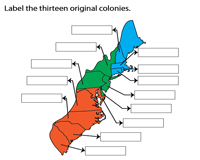 Bolster map skills and recapitulate the names of the thirteen British Colonies of America with this locate and label activity. Direct children in grade 4 and grade 5 to identify each colony and name it. Recognize the three colonial divisions as well. 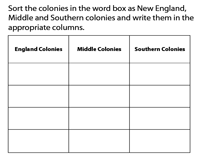 Categorize the thirteen colonies in the word box based on the location as New England, Middle and Southern Colonies and write them in the appropriate columns of this pdf. Grouping the colonies help learn their similarities.

Thirteen Colonies and their Capitals 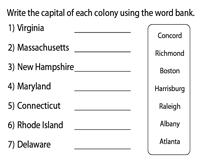 The goal here is to help children recall from memory the capital of each colony. A list of capitals is provided in the word box. Read the names of the colonies, pick their capitals from the word box and write them beside the colony to complete the pdf worksheet.

Match the Colonies and their Founders 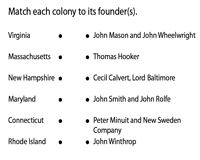 An extremely competitive economic philosophy pushed European nations to acquire as many colonies as they could in America. Get children to research a little more about each colony and know who founded the colony and match the colony to its founder. 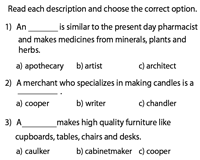 A pattern of jobs and industries emerged in colonial America according to the different regions. Read the descriptions and choose the occupation in this MCQ worksheet and learn about the jobs in the colonies. 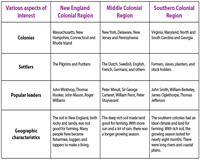 Equip 6th grade and 7th grade students with this printable chart that helps compare the colonies and find out how they differ from each other in terms of climate, religion, occupation, reasons for settlement, form of government and more. 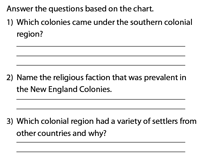 This printable worksheet for grade 6 and grade 7 features questions based on the comparison chart. Analyze the distinguishing features of the three colonial regions and answer the questions. Great stuff to test comprehension! 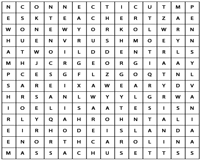 Hidden in this pdf 14 x 14 word search grid are the names of the thirteen colonies. Let the explorers look for the names of the colonies letter by letter, horizontally and vertically and hone their spelling skills in the process. 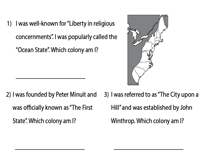 Put on your thinking caps, and get prepared to solve this bunch of exciting colonial-America riddles. Read the descriptions, guess the name of the colony, and reiterate a few facts about each of the thirteen colonies.

Things you did not know about 13 colonies 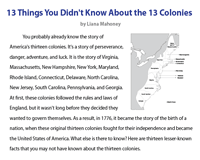 As the author tells, the story of the 13 colonies is a story of adventure, perseverance and luck. Go through some iconic elements in America's glorious history, and answer a few questions.