Learning the names, geographical expanse and interesting facts about our oceans can be fun, easy, and enjoyable with our 'Five Oceans of the World' printable maps, appealing worksheets and interesting activities. We have colorful maps, fact flashcards, riddles, a crossword puzzle, exercises to identify and locate the oceans and many more PDFs in store for children of elementary school, to explore, learn and absorb.

The Five Oceans of the World 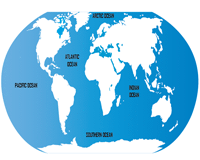 Familiarize kids with the five oceans of the world, the single body of water that encircles our planet earth. This printable map indicates the names and the expanse of each of these five oceans.

Know Your Oceans - Chart with Facts 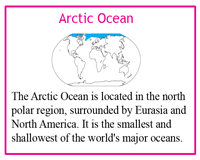 Feed some interesting facts about our world's oceans, to our inquisitive young minds, using our flashcard worksheet. It may also serve as a comprehensive informational chart. 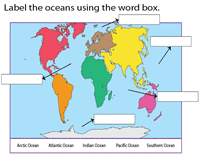 Help children of grades 3 to 5, identify and label the oceans on the map, using the word box. This visual practice exercise will enable them to distinguish the expanse of the oceans. 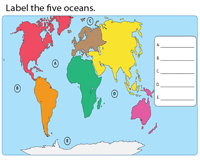 Give children of elementary school, this opportunity to name the five major oceans, using this printable map to make the exercise more appealing and effective, especially for visual learners.

Unscramble and Number the Oceans 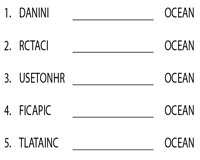 Learning about oceans will become much more enjoyable with this worksheet, when kids get to unscramble the names of the oceans and locate them on the map. Let them take a dive at it right away!

Match the Oceans with Facts 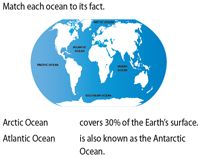 Supplement knowledge of the five oceans of the world, with this interesting exercise involving matching the oceans with their corresponding facts, that kids will love to know about. 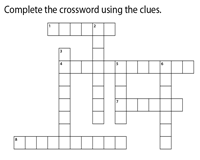 It will not be easy to keep little ones of grades 3 to 5, from jumping at this crossword puzzle on our global oceans and emerge sufficiently informed and excited to know some more. 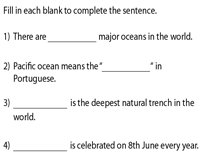 Our printable ocean worksheet will essentially help young learners in both, assessing and increasing their learning about the five major oceans of the world, with this fill-in exercise.

Which Ocean am I? 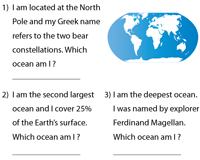 Wouldn't it be very exciting to engage in this enjoyable riddle activity to crack the names of the oceans? It certainly will be. Let's see how quickly our enthusiastic minds know which ocean it is!