Life without electricity is unimaginable. Yesteryear's luxuries have become today's necessities. The electricity worksheets have ample exercises to comprehend the flow of electric current in open, closed, series and parallel circuits. Find PDFs to identify the power sources as 'mains' or 'battery', interpret electrical symbols, learn to distinguish between conductors and insulators, comprehend positive, negative and neutral electric charges and a lot more! 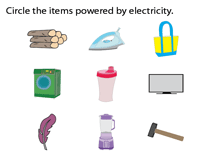 Brainstorm kids of grades 1 and 2 of how electricity is used in their day-to-day life. Follow up with this pencil-paper activity that requires kids to circle the appliances powered by electricity. 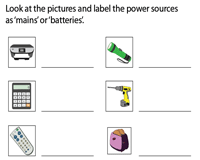 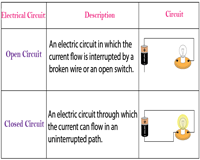 This clearly laid out electrical circuit chart for grade 6 consists of open, closed, series and parallel circuits. Enclosed here is a brief description and a circuit diagram to illustrate each type of circuit. 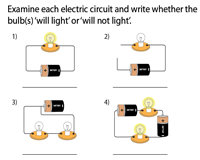 Observe each circuit diagram keenly, identify the type of circuit as open or closed and predict if the bulb would light or not based on the circuit being open (broken) or closed. 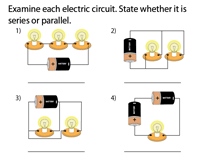 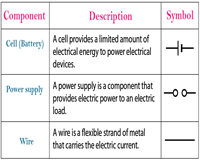 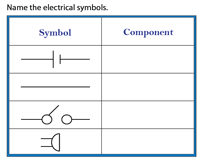 Identify the symbol and name the component it represents in this name the electrical symbols worksheet. Serves best to recapitulate the knowledge acquired. 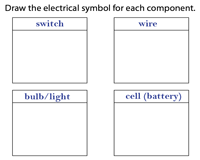 This interesting worksheet assists in retrieving knowledge of electrical symbols. The students of grade 6 are expected to draw the corresponding symbols for the given component. 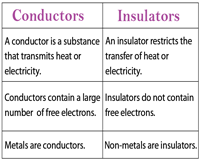 Identify the conductors and insulators 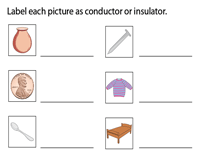 This visually appealing worksheet contains illustrations of objects. Encourage the students of grades 5 and 6 to investigate and identify the conductors and insulators and label them by reasoning out. 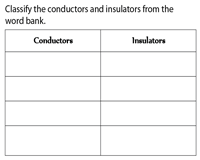 Conductors and insulators | Cut and paste 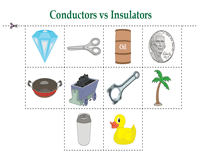 This fun cut-and-paste activity helps reinforce the concept of conductors and insulators and assess the knowledge of students with ease. Snip the pictures, sort them and glue them in the correct columns. 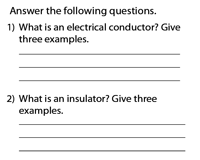 Wrap up the topic with this electricity-question-answer worksheet for grade 6. Read the questions carefully and answer them based on what you have learnt about conductors and insulators. 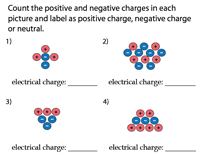 This self-explanatory worksheet helps comprehend the electrical charge of an object as positive, negative or neutral depending on the number of protons (+ve) and electrons (-ve). Count the charges and label accordingly.

Fill in the blanks 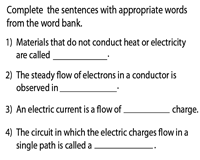 Read the sentences and complete them with appropriate words from the word bank. Utilize this electricity worksheet to recapitulate and test knowledge of students of grades 5 and 6.