This far-from-exhaustive list of angle worksheets is pivotal in math curriculum. Whether it is basic concepts like naming angles, identifying the parts of an angle, classifying angles, measuring angles using a protractor, or be it advanced like complementary and supplementary angles, angles formed between intersecting lines, or angles formed in 2D shapes we have them all covered for students in grade 4 through high school. Application seals concepts in the minds of children, and hence adding a little challenge into the routine in the form of free worksheets is definitely not a bad idea.

Explore the Angle Worksheets in Detail

Parts of an Angle

Are you aware of the four ways of naming angles? Buckle up with these printable worksheets, and watch how accurately and effortlessly children name angles using the three points.

Interior and Exterior of an Angle

Turning the spotlight on interior and exterior angles, these 4th grade and 5th grade pdfs hone necessary skills in locating or marking a point in between or outside the two arms of an angle.

Spark interest and encourage children to identify acute, right, and obtuse angles with a bunch of fun-filled exercises like recognizing angles in a clock, angle types in real-life objects, and a lot more!

Become twice as conversant with identifying, classifying, and drawing all six types of angles: acute, right, obtuse, straight, reflex, and complete angles with this collection of pdfs.

Use the protractor tool like a pro to measure and draw angles. Printable protractor templates, a chart illustrating the parts and use of the tool, and protractor reading exercises await students in elementary school.

Reading the correct scale of the protractor to measure angles: the inner or outer scale, measuring and classifying angles, and solving linear equations are the skills grade 4 and grade 5 students acquire with these exercises.

Show your students how to construct angles using a protractor with these drawing angle pdfs. The exercises include constructing angles with 1° increments or 5°, drawing reflex angles, and more.

Angles on a Straight Line

Work your way through this compilation of worksheets and examine the angles on a straight line that add up to 180°. Grade 4 and grade 5 students find the measures of the unknown angles by subtracting the given angles from 180°.

Angles Around a Point

Did you know that the angles around a point add up to 360°? Keep this fact in mind as you figure out the measures of the unknown angles by adding the given angles and subtracting the sum from 360°.

If it's a pair of angles you see and are trying to figure out if they make a complementary or supplementary pair, the trick is just adding them up and if their sum is 90° they are complementary and if it is 180° they are supplementary. These worksheets are a sure-shot hit with 6th grade and 7th grade learners.

Explore this bunch of printable adjacent angles worksheets to get a vivid picture of the angle addition property exhibited by angles that share the same vertex and are next to each other.

Linked here are exercises on angles formed by intersecting lines! Know the congruent properties of vertical angles or vertically opposite angles and apply them to determine unknown angle measures.

Two angles that are both adjacent and supplementary are a linear pair. The measure of such a pair sum up to 180°. Get to the heart of such angle pairs with these pdf worksheets and solve equations for the unknown angle measures.

Tap your grade 7, and grade 8 student’s potential in identifying the different pairs of angles such as complementary and supplementary angles, linear pair, vertical angles and much more with our engaging set of worksheets.

Angles Formed by a Transversal

Construct additional and experiential knowledge with these 8th grade and high school handouts to comprehend the seven types of angle pairs formed by a transversal that include corresponding angles, alternate angles, and consecutive angles. 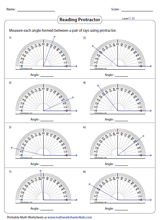 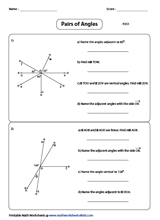 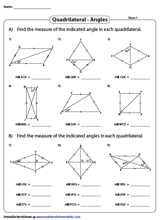 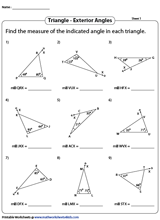