Catering to grades 2 through 7, the Polygon worksheets featured here are a complete package comprising myriad skills. The step-by-step strategy helps familiarize beginners with polygons using exercises like identifying, coloring and cut and paste activities, followed by classifying and naming polygons, leading them to higher topics like finding the area, determining the perimeter, finding the interior and exterior angles and the sum of interior angles, solving algebraic expressions and a lot more!

Navigate through the polygons charts featured here for a thorough knowledge of the types of polygons. Learn to identify the polygons and get a clear picture of the interior, exterior angles and the sum of interior angles as well. 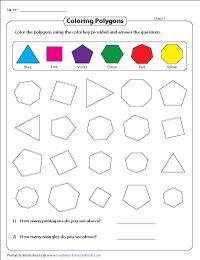 There can't be a better way to introduce polygons, than what kids love the most - coloring! Direct kids to follow the color key provided to identify polygons like triangles, quadrilaterals, pentagons and more. Test comprehension with the questions that follow. 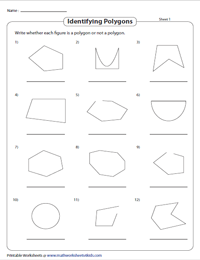 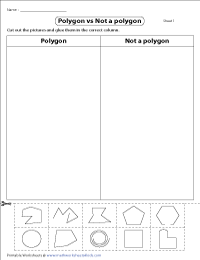 Polygons Vs Not-polygons | Cut and Paste

Snip the shapes, sort them as 'polygons' and 'not polygons' and glue them in the appropriate columns of the t-chart. This interesting activity assists second and third grade kids in identifying polygons. 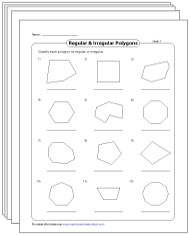 Distinguish between the types of polygons such as regular, irregular, concave, convex, simple and complex. Count the number of sides and name the polygons featured in these classifying polygons worksheets. 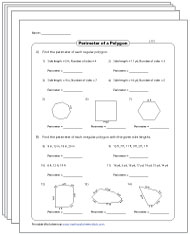 Access this assemblage of worksheets featuring PDFs on finding the perimeter of regular and irregular polygons with integer and decimal dimensions. Find the side length and solve algebraic expressions too. 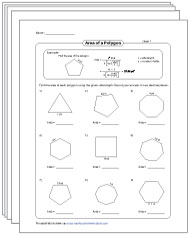 Explore this batch of area of polygons worksheets to determine the area of regular and irregular polygons using the given side lengths, apothem and circumradius. Practice finding the apothem as well. 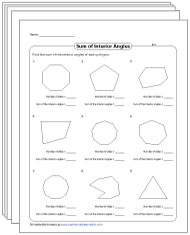 Fine-tune your skills using the angles in polygons worksheets with skills to find the sum of interior angles of regular and irregular polygons, find the measure of each interior and exterior angle and much more.