Addition worksheets are divided into many subtopics that would help both teachers and homeschool moms to choose more specifically. Each subtopic includes a lot of worksheets that would give a perfect practice in addition.

Explore the Addition Worksheets in Detail

Basic addition worksheets include simple addition facts from 0 to 9. This page suitable for kindergarten, grade 1 and grade 2 kids.

Number line worksheets help the kids understand how the numbers will be added.

1+1 is 2, 2+2 is 4. Isn’t that fun adding the same numbers? Explore this wide range of worksheets presenting doubles with attractive pictures and word problems, and enjoy adding them!

Develop mental math fluency using these making 10 worksheets and learn to use this addition strategy efficiently with ten-frames, by joining addends or splitting an addend and bridging to 10.

Advanced addition worksheets include 4-digit, 5-digit, 6-digit and large numbers with more than 6 figures. Adding the list of numbers included.

Practice these word problems to understand how addition is used in day to day life.

Properties worksheets include commutative, associative, identity and inverse of addition.

It includes mixed review worksheets with perfect combination of both addition and subtraction.

Gain ample practice with our vast collection of worksheets on estimation. Numbers are to be rounded to the nearest ten, hundred, thousand or ten thousand. Subsequently, find the sum and difference of the given numbers.

In and Out Boxes

Find the output of the table by performing the addition rule. 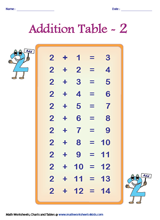 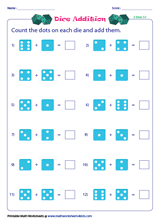 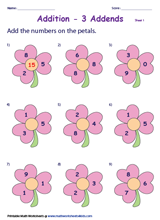 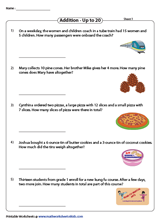