Explore the Sequence and Series Worksheets in Detail

This assortment of finite geometric series worksheets includes topics like evaluating series, determine the number of terms, finding 'a' and 'n' and more!

Get ample practice in the concept of infinite geometric series and learn to identify whether the series converges or diverges. Evaluate the sums of the infinite series.

This collection of special series worksheets centralizes the concept of determining the sum of the series related to natural numbers and finding nth term for special series and much more!

Learn to distinguish whether the sequence is arithmetic or geometric. This array of worksheets includes finding the explicit formula, finding the missing terms and much more.

These recursive sequence worksheets concentrate on the idea of finding the recursive formula for the given sequences and ascertain the sequence from the implicit formula provided.

Partial Sum of the Series 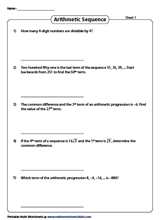 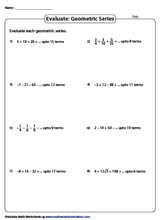 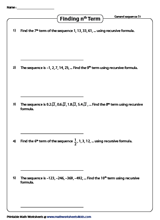 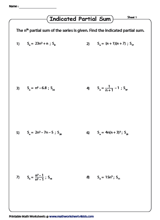 Partial Sums of the Series