These worksheets are exclusively designed for Grade 4 through Grade 6 students to master their decimal addition skills up to thousandths place. Print and download a variety of worksheets on base ten blocks, adding decimals in vertical and horizontal format, grid addition, line up addition, adding decimals using number lines and much more!

Get students to use number lines to sum up decimals with two or three addends.

This series of base ten blocks provides students a strong foundation to add up decimals. Blocks are configured according to the decimal place values.

The decimal addends contain a mixed range of place values on either side of the decimal point. Add the decimals that are arranged in a vertical format (regrouping and no regrouping).

The decimal numbers are aligned in grids. This series of worksheets provides a solid learning platform to add the decimals with varying place values from tenths up to thousandths.

This assembly of worksheets features decimals in horizontal format. Printables are categorized in accordance to place values of decimals up to thousandths place.

Employ this set of printables and challenge learners to sum up the problems that comprise either three or four decimal addends. 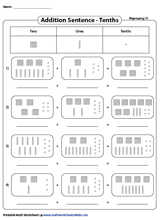 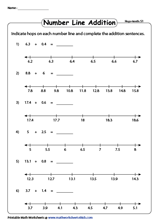 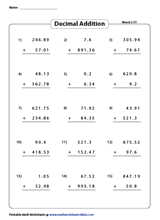 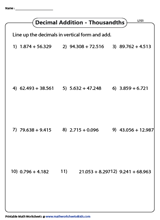