Before and After Worksheets

You're bound to find the perfect collection of printable before and after worksheets that combine the concept with vibrant images to bring in a dose of playfulness into your preschool, kindergarten, and grade 1 classroom. Practice identifying the relative position of objects that are placed before and after real-life objects, and shapes, learn to spell and write the words, and comprehend their meanings with a variety of exercises like tracing, coloring, circling, cut and glue and more. Our free before and after worksheets are an ideal place to start your journey. 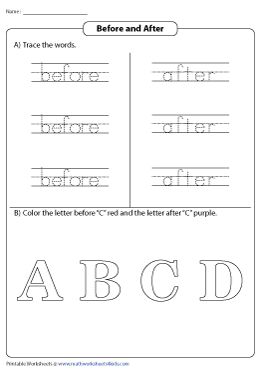 Tracing the Words Before and After

An easy and inviting tracing worksheet makes for a great start. Get preschool and kindergarten kids to write over the letters of the words before and after repeatedly and color the letters as directed. 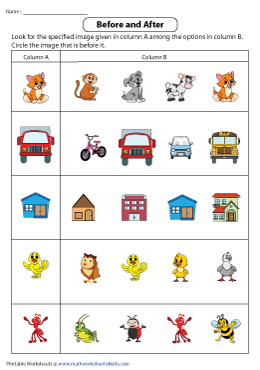 Circling the Object That Is Before

Lean into the ever-popular exercise of identifying the object that is placed before the object illustrated in Column A. Preschool kids hunt for the similar object in a set of four pictures in Column B and circle the one before it. 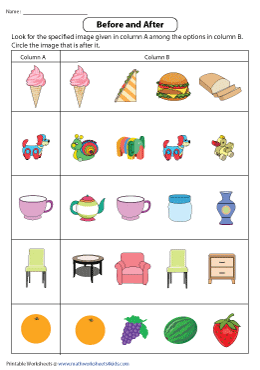 Identifying the Object That Is After

When it comes to positional words, this before and after worksheet pdf is a key to ease. Let kids comprehend the position of the objects relative to the specified object and circle the object that is after it. 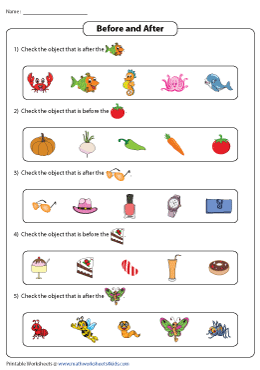 Identifying Before and After

Taking inspiration from sea animals to insects, this exercise attracts kids in grade 1 and gets them scouting for the indicated object and checking the image before or after as per the instruction. 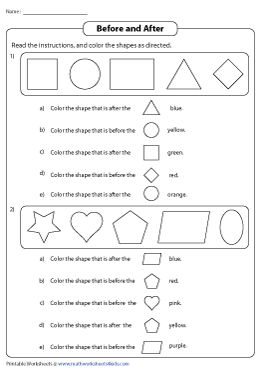 Coloring the 2D Shapes Before and After

Maintain visual interest, by incorporating this printable before and after worksheet, where shapes meet the positional words. The little ones comprehend the instructions given and color the shapes accordingly. 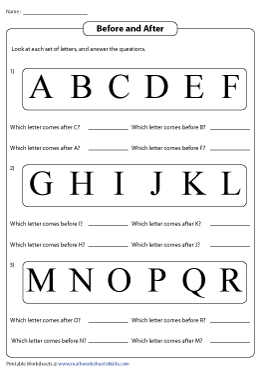 Identifying the Letters Before and After

This pdf never fails to pack a punch, if you intend to merge letters with the concept of position. Get kindergarten and grade 1 kids to observe the series of letters and identify the letter before or after as described. 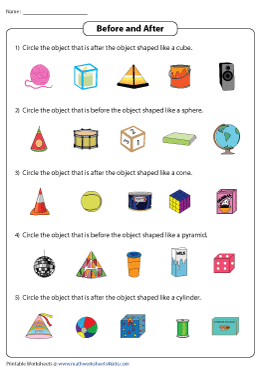 Circling Objects Placed Before and After the 3D Shapes

Blending two concepts: positions and 3D shapes, this printable identifying before and after worksheet is a must-try. The catch is, kids need to identify the real-life 3D shape to figure out the objects that are placed before and after it. 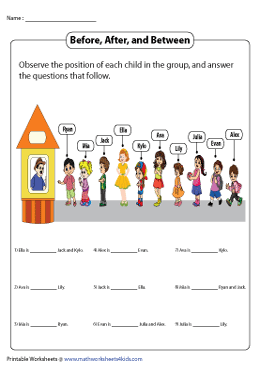 Completing the Sentences Using Before, After, and Between

Lined up at the ticket counter are ten kids whose names are mentioned. Let 1st grade kids identify the position of the children and complete each sentence with the positional words: before, after, and between. 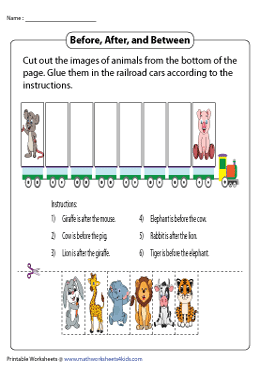 Cut and Glue Activity | Before and After

Play up the fun quotient as kids cut the pictures of animals, while making comprehension of the terms before and after a major focal point with this pdf. Arrange the animals and glue them in the railroad cars.