Greater Than, Less Than Worksheets

Vivify learning with our printable greater than, less than worksheets packed with colorful images and engaging exercises in conjunction with manipulatives to help preschool, kindergarten, and grade 1 kids. Whether it is fun-filled cut and glue activities, or counting pictures and comparing the sets using <, >, and =, or just simple number comparisons, these worksheets on comparing numbers up to 10 with their utmost versatility, are a surefire way to refine your kids' subitizing skills. Our free greater than, less than worksheets are a good place to begin your practice. 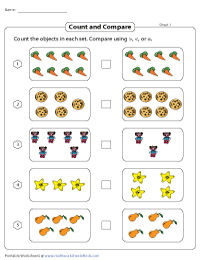 Leveraging on a preschool goer's attraction to colorful images, these printable comparing single-digit numbers worksheets spur them into counting pictures in each set and comparing them. 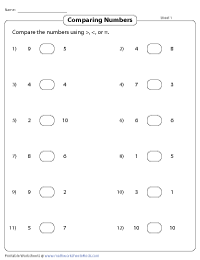 Comparing Numbers up to 10

Be a dab hand at comparing numbers with these comparing numbers up to 10 worksheets pdfs. Kindergarten and grade 1 kids compare the numbers on either side and identify if one is greater than, less than, or equal to the other. 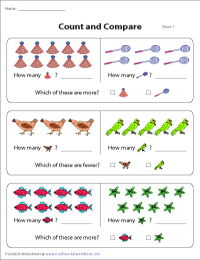 Keep numbers flowing through the minds of your preschool kids as they count the cats and dogs, shirts and frocks, crabs and octopuses and compare the number using an appropriate comparison symbol. 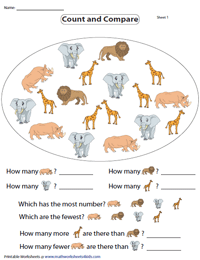 A slice of the jungle in these greater than, less than worksheet pdfs is enough to magnetize kids toward building skills as they count and compare the population of animals and insects of each kind and identify which are more and which are few. 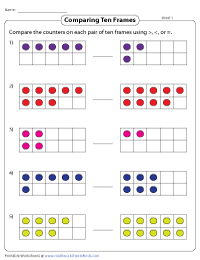 Practice divergent thinking and use the ten frames manipulative to compare numbers. Get kids to figure out the number of counters in each ten frame and compare the pair of frames using <, > and =. 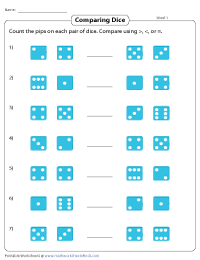 Comparing the pips on the dice is yet another great way to get kids in kindergarten even more invested in comparing numbers. Instruct kids to count the pips on the face of each dice and compare them. 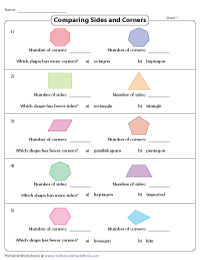 Watch kids in 1st grade flit between fun and learning as they count the number of edges and vertices of each 2D shape, compare the shapes based on the specified attributes and identify the shape in these greater than, less than pdfs. 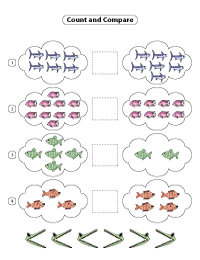 Snappy the Alligator, when give a choice between two baskets of fish, always chooses the one with more. Ponder and figure out which set gets snapped by the gator and glue its snout opened toward it. 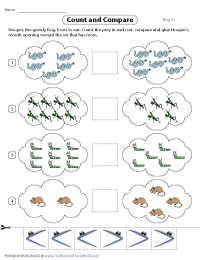 The more the merrier is the mantra of Hooper the foodie frog. Kids subitize and compare the number of items, decide which is more; cut and glue Hooper's mouth correctly and help him choose the one with more food. 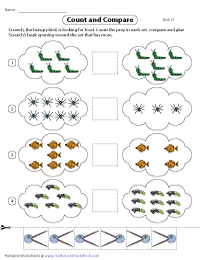 Cut out Screech the Birdie's beak, compare the worms and insects and glue the beak open toward the set that has more and help her make the right choice in these printable greater than, less than worksheets.