As money enjoys a tremendously important place in human life, we ought to prepare children of grade 2, grade 3 and grade 4 to be able to understand, deal with, and manage money in their everyday life. From the simplest task of counting the coins in their piggy banks to a seemingly-tricky affair of choosing between two stores that sell the same product, there's a desperate need for kids to know their money in and out. Our Comparing and Ordering Canadian Money Worksheets are great help, as they help children compare, count, and order money using oodles of activities inspired from real life. 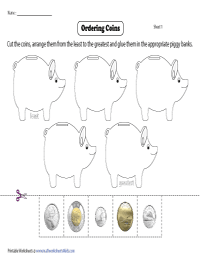 Knowing the values of coins and bills is at the heart of being money-wise. Each pdf worksheet consists of 3 parts: cutting the coins, ordering them from the least valuable to the most valuable, and gluing them in piggy banks. 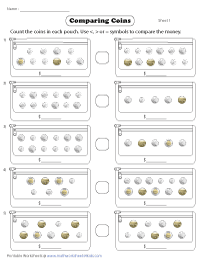 This bunch of printable exercises seeks to effect an immediate improvement in kids' money skills. Using one of the comparison operators, they calculate the money in the pouches and compare the amounts. 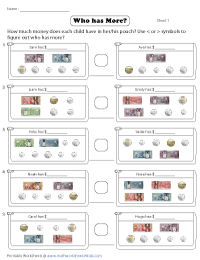 Comparing each other's money is exciting, isn't it? The task is for 2nd grade kids to count the coins and bills in the pouches, compare the amounts, and write whose amount is greater than or less than the other. 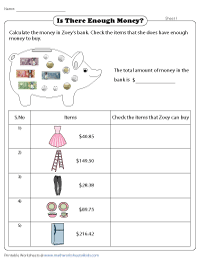 Calculate the Money in Banks

Grade two kids count the money in the piggy banks, and find out if the amount can buy them the items depicted in the page.They then mark the items they can afford to buy, and the ones they can't. 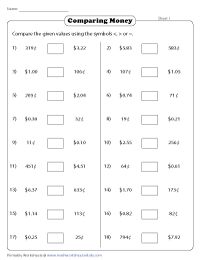 Money-skills of kids grow from mundane to exciting in this pdf worksheet, where money is portrayed in cents and dollars. They compare the values in each question, using the two comparison symbols. 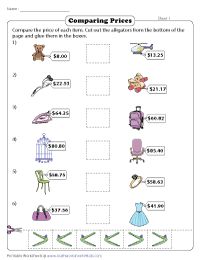 When did you last flaunt a costly item? This set where, along with alligators, frogs, and beaks, grade 2 kids cut and glue the comparison symbols, to compare the prices of the items is simply amazing. 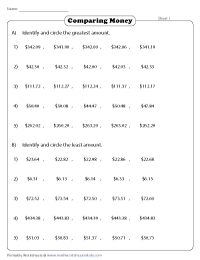 This amazing set of exercises is divided into two parts; Part A engages kids in identifying and circling the largest amounts, and Part B asks them to recognize and circle the smallest amounts. 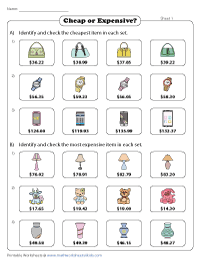 Comparing the Costs of Goods in Canadian Dollars

Once they have breezed through these worksheets, kids in grade 3 will have easily upscaled their money-wisdom. Part A is where they look for the cheapest item, and Part B is where they spot the costliest item. 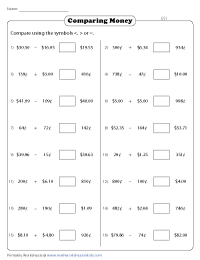 Children's money skills grow to covetously new heights. They perform subtraction or addition to compare the difference or sum with the given amount, and then they do this on both sides of the comparison symbol. 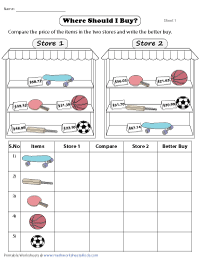 There's little dispute that we have to talk our way into getting the best deal while shopping. We prepare grade-four kids to foster the habit of comparing the prices at two stores, so they pay the best price. 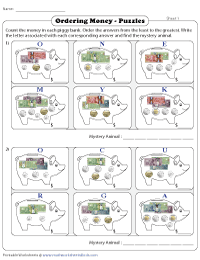 In this set of worksheets, kids tell the mystery animal by putting together the letters linked with each amount, after counting the coins in the piggy banks and ordering the amounts from the smallest to the largest. 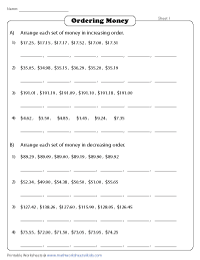 In Part A, grade-three kids reorder the amounts in increasing order, and in Part B, they arrange them in decreasing order. It should be pretty easy for young learners to manage money now onwards! 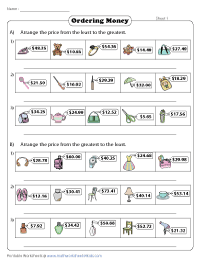 In the first part, students arrange the items in the ascending order of their prices, and in the second part, they put these in their descending order, after having duly compared the five prices. 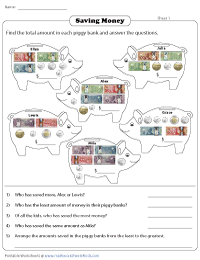 Here's an opportunity for the ambitious money masters in grade 4 to let their skills thrive. They answer questions based on the comparisons they have made after finding the amount in each piggy bank.