Welcome to MW4K's Direct and Indirect Object (DO & IO) Worksheets, another set in our series of ELA worksheets designed in complete compliance with Common Core State Standards. This is an easy-to-use toolkit for young grammarians from grade 4 to grade 7, to quickly identify their direct and indirect objects, banking on this collection of PDFs equipped with definitions, descriptions, directions and examples. While we've insisted every detail is dealt with as simply as it could be, we've gone the extra mile wherever required. Get started with our free worksheets! 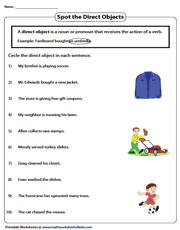 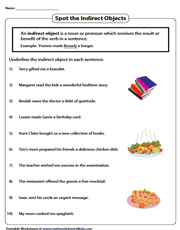 Folks, it's time to scout for indirect objects. If you apply the mantra laid out earlier in the DO & IO chart, it's not as tall an order as it might appear to be. Watch your step while you're out hunting for IOs though! 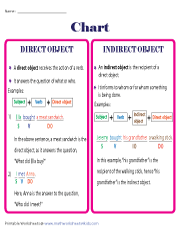 Our direct and indirect object chart is a compulsive print. With super simple definitions and crystal clear examples, it pretty much spells out the watchword for the little ones in this DO & IO journey. 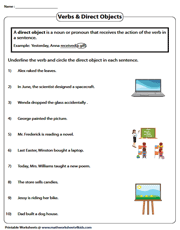 This direct object PDF reinforces the DO learning with another set of ten sentences. Children in grade 4 and grade 5 first identify and underline the verbs and then circle the direct objects. It's a game won with hard work! 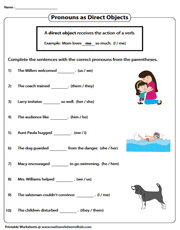 A direct object needn't necessarily be a noun at all times; often pronouns take the shape of direct objects too. In this printable PDF, children complete the sentences using the right pronouns as DOs. 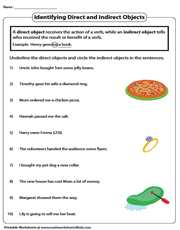 This 5th grade worksheet gets kids busy finding and labeling DOs and IOs in every given sentence. Remember an IO is always a person, while a DO isn't. C'mon, show your grammatic mettle! 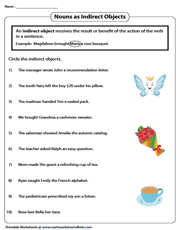 This printable worksheet gets our young heroes rolling on a circling spree, as they find out the nouns used as indirect objects in every sentence. Be thorough with your chart, and all's going to be well and wisely put. 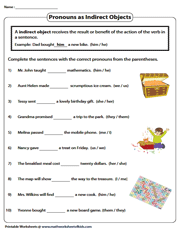 It's not just direct objects that pronouns can be, they can be indirect objects too. Here, kids complete the sentences using the correct pronoun from parentheses. 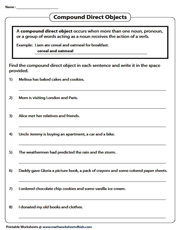 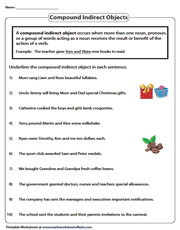 When there are two or more people receiving the direct object, we feel the presence of a compound indirect object (CIO) there. Let children identify and underline the CIO in each sentence. 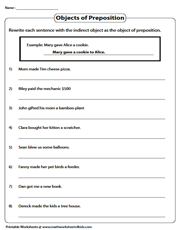 Indirect Objects as Objects of Preposition 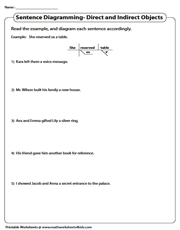 Diagramming enables kids to understand each and every grammatic bit in a sentence. Use this printable worksheet to help kids practice diagramming sentences with direct and indirect objects.