Work up an appetite for language acquisition with our printable noun worksheets. Kids in kindergarten through grade 5 practice identifying naming words, and using frequently occurring nouns in sentences. With a string of exciting activities like circling, underlining, sorting, coloring, cut and glue lined up, there'll be no dearth of practice exercises. Identify nouns in sentences, complete sentences with nouns, complete rebus stories with nouns of pictures, and much more to comprehend the function of nouns. Our answer keys are a time-saver! Give your noun-learning a head start with our free noun worksheets! 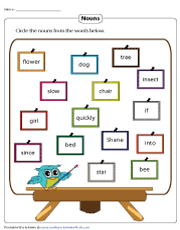 Perfect for kindergarten and grade 1 kids, this printable identifying nouns worksheet encourages skills in recognizing naming words. Kids read each word on the board and circle it if it's a noun. 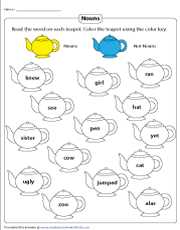 How about a little tea break? We love a 2-for-1 activity, and so do you! Watch your kids scout out the nouns and color the noun-teapots yellow and non-noun teapots blue in this noun worksheet pdf. 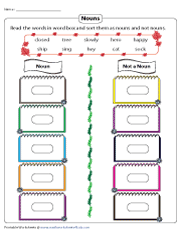 Sorting Words as Nouns and Not Nouns

Guide your little ones through this sorting nouns exercise. Help them decide which of the words in the word box are nouns and which are not and write them in the appropriate column. 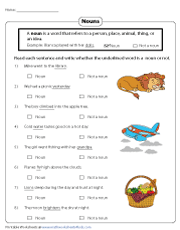 In "Mike went to the library", "library" refers to a place so it's a noun. Children in grade 2 read each sentence, focus on the underlined word in it, and check "noun" or "not a noun" as appropriate. 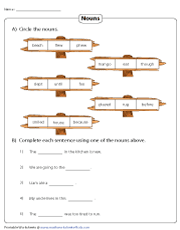 If your kids have their noun identification skills on lock, take it up a notch with this noun worksheet pdf. Look at each word set, find the noun, and circle it. Then use these nouns to complete sentences. 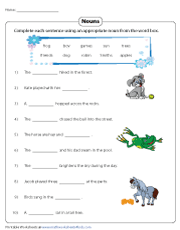 Filling in the Blanks with Nouns

The budding noun-talent in grade 1 will love boasting this printable! Complete each sentence using a noun from the list of nouns. There are nouns that refer to people (family), animals (dog), and more.

Read each sentence and underline the nouns in it. The "book" and "shelf" in the first sentence are nouns as the words refer to things. There are at least two nouns in every sentence. 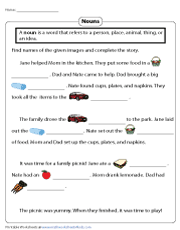 Naming Pictures in a Rebus Story

Break away from the humdrum of noun learning and pop in this rebus story. Kids in 2nd grade are expected to read the story and complete it by naming the pictures and let their noun-knowledge thrive in the process. 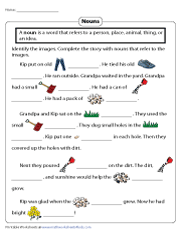 Completing a Rebus Story with Nouns

Your noun-practice is merrier than ever, for here's a cute story working hard to help early learners pass their noun tests with flying colors. Observe each image and write the naming word in the blank. 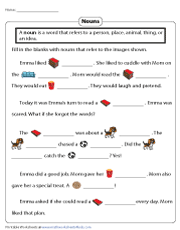 There's just something about stories that makes them blend easily with any concept. A little bit story and a little bit noun exercise, this rebus passage gets kids excited as they identify the pictures and write their names. 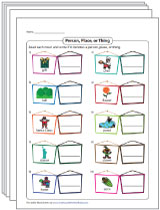 "Boy" is a person, "school" is a place, and "book" is a thing. Kids in kindergarten through grade 2 get loads of practice in categorizing nouns as words referring to people, places, or things with this bundle of noun worksheets. 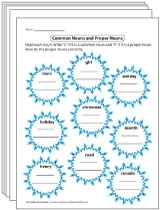 How are "teacher" and "Mrs. Miller" different? While "teacher" is a common noun, "Mrs. Miller" is a proper noun. Pique the eager minds of your 1st grade and 2nd grade kids as they practice these two basic types of naming words. 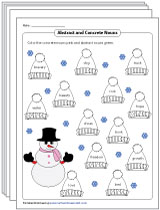 Surprise your crew of 3rd grade kids with cart loads of amazing activities that help identify the concrete nouns that we can see, hear, smell, touch, or taste and abstract nouns we can't and provide practice distinguishing between them. 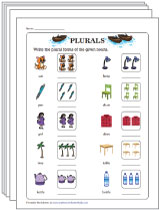 We have a huge stock of noun-number worksheet pdfs. Kids up to grade 4 recognize the nouns that refer to one and more than one and learn a few spelling rules to convert the singular nouns to plurals. 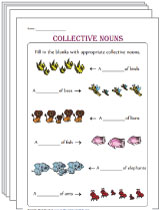 Children in grade 3 and grade 4 are likely to have encountered phrases like "a bunch of bananas" and "a galaxy of stars". In this collection of worksheets on nouns, learn heaps of such phrases. 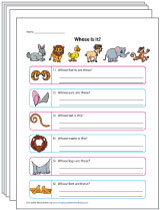 It takes only half the time and energy to say "Tim's pen" as it takes to say "the pen that belongs to Tim". Make the most of these printable noun worksheets for 4th grade and 5th grade kids to form, identify, and use the possessive nouns.