Magic your letter M into a masterpiece with our printable letter M worksheets. Mold preschool and kindergarten children into masters of the letter M, the 13th letter in the English alphabet, with a medley of mesmerizing activities that resonate with playful learning. Our letter M worksheet pdfs, chock-full of colorful crafts and exercises that motivate the young minds to manifest their letter M writing and identifying chops, are learning at its most mirthful. Majestically make way for M, both the uppercase and lowercase, with our free letter M worksheets! 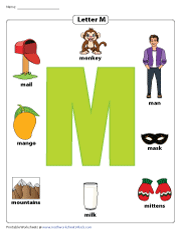 Now enchanting like a monkey, now making mouths water in the form of a mango, the letter M is both amusing and sumptuous. Every picture in this letter M chart does its bit so children practice M with relish. 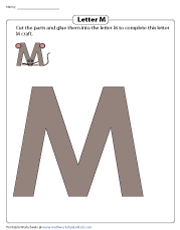 Crafting a Mouse | Cut and Glue 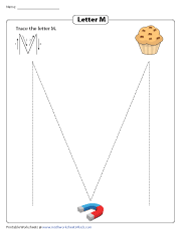 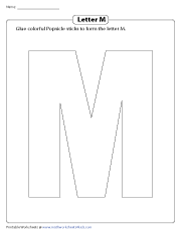 It's heartening to see a beautiful M formed with these several sweet pieces of ice with a fruit flavor! Not only will this letter M craft feel super-special for children, it will see them wishing to craft M repeatedly. 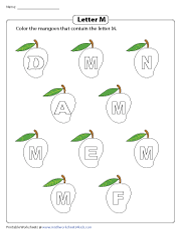 Dish up a delicious mango meal with this printable letter M worksheet! While a lot of the mangoes here have the letter M written on them, there are some that don't. Instruct children to color the M mangoes. 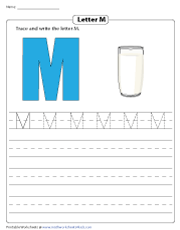 Proficiency in letter M is just a glass of milk away! Give yourself a glassful of letter M nourishment before you start tracing and writing the letter. The energy and exuberance won't leave long after you complete the activity! 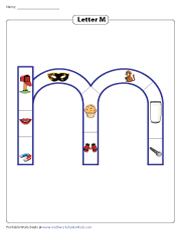 Muster your forces to manipulate our letter M chart so it magnanimously serves your M practice. Watch preschool and kindergarten children maintain the letter-M momentum with pictures whose names start with M. 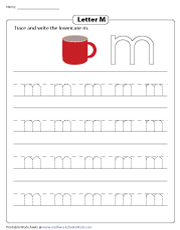 Make yourself a steaming mug of letter M enrichment as this pdf, tracing and writing the lowercase m, will require one. Continue to remain your most motivated version with this letter M worksheet. 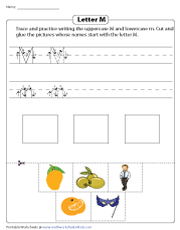 Writing the big M and the little m is quite a meticulous process, but encourage children to dedicate hours of preparation for this so they write M and m flawlessly. Also ask them to complete a cut-and-glue activity. 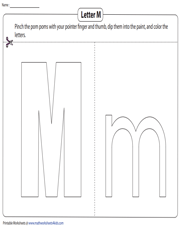 Paint your M with whichever color you please! As you pinch the pom poms and dip them into the paint, watch two Ms all decked out and ready to win hearts. This letter M craft using pom poms is utter joy! 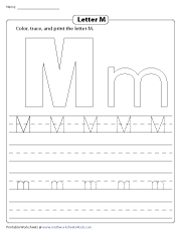 The letter M is music to your ears! Let preschool and kindergarten children concentrate more on this music by coloring, tracing, and printing the letter M so it continues to ring melodiously throughout their life. 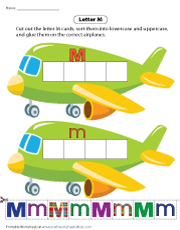 Our printable letter M worksheets are replete with letter M pursuits, which help preschool and kindergarten children connect with the letter in so many marvelous ways. Add this letter M cut-and-glue pdf to the list. 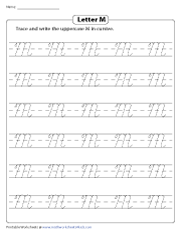 Cursive handwriting, a little laborious but elegant, is very functional in everyday writing. Enjoy the benefits of cursive, infrequent pen lifting and better writing speed for example, by writing the uppercase M in cursive. 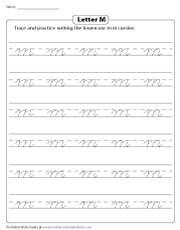 Welcome back to yet another momentous letter M worksheet, where you direct the soon-to-be writing geniuses to further enhance their craft by writing the lowercase m in cursive. Simply exult in the spirit of M! 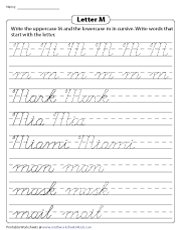 Did you know cursive writing helps produce complex thoughts in a shorter time? Let your imagination flow with your writing as you practice writing the capital M and small m, along with words and names beginning with M.