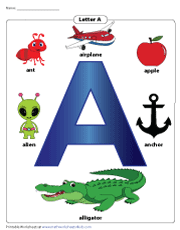 Letter A Chart | Recognizing Letter A

Satisfy young kids' learning quest with this compulsive-viewing chart, where kids identify the letter A. Try saying the name of each picture and pay attention to the sound of the letter A in it. 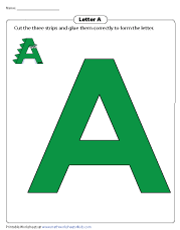 Letter A | Cut and Glue

Flash around your skills by cutting and gluing the shapes to piece together a beautiful letter A! Put the two slanting lines and the sleeping lines in place to construct the letter A. 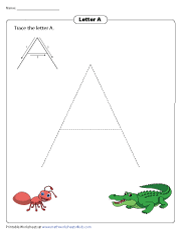 When in full bloom, the letter A is absolutely elegant. While some enjoy the ease of writing it, others relish its sight and symmetry. Excite preschool and kindergarten children with this pdf tracing the letter A activity. 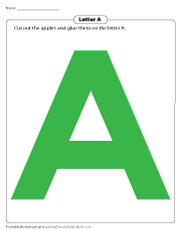 Making Letter A with Cheerios

Young kids love cheerios as their favorite snack. No wonder they shower the same love and fascination as they get busy giving shape to the letter A in this delicious cheerio-inspired letter A worksheet pdf.

A bunch of balloons have made their way into this printable uppercase A worksheet. The recognition skills of your little ones will soar high with the balloons as they identify the ones with the letter A and color them. 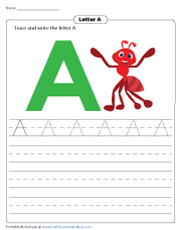 Recognizing and Writing Letter A

Add bells and whistles to your letter-A practice with this beautiful, buzzworthy practice sheet, where there's an ant clapping hold of the uppercase A. Practice recognizing and writing the letter A. 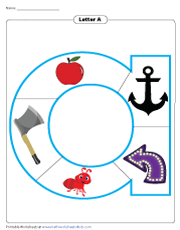 The apple, ant, arrow, and axe packed into the letter a in this printable chart add an extra layer of doodle to kids' practice as each picture spills over a letter a sound at its outset. 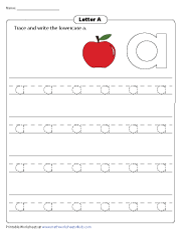 Tracing, Writing, and Printing Lowercase A

The lowercase a is as alive and kicking as its uppercase counterpart! Keenly observe the model "a" at the top of the page, and complete this letter a practice worksheet by tracing and writing the lowercase a.

Uppercase and Lowercase A 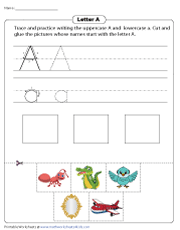 Watch children flaunt their letter-A writing smarts in this activity that's part of our letter A worksheets! They first write both the uppercase and lowercase As and then cut out and glue the pictures that start with the letter. 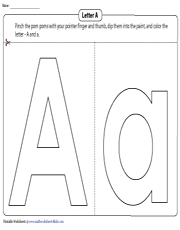 Painting Uppercase and Lowercase A with Pom Pom

It's the ease of this painting letter-A with pom poms activity pdf that hits kids first! Task them with dipping the pom poms in paint and coloring the uppercase and lowercase, and enhance their fine motor skills!. 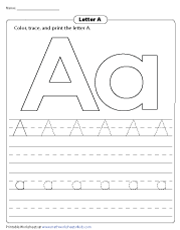 Uppercase and Lowercase A | Color, Trace, and Print

Give it up for this segment of our printable letter A worksheets, where the uppercase A and the lowercase a are operating full-on! Instruct the young scholars to color, trace, and print the uppercase and lowercase a. 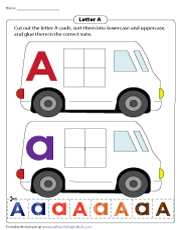 Sorting Uppercase and Lowercase A | Cut and Glue

The combination of the uppercase A and lowercase a in this sorting activity from our printable letter a resources coheres perfectly as children cut out and glue the instances of the letter in the correct van. 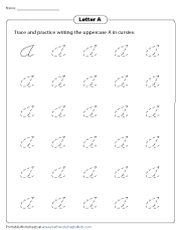 Make the most of this section of our letter A worksheets and activities, where there's oodles of practice in writing the cursive uppercase A, and add an element of style to your writing. 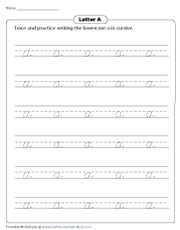 Once preschool and kindergarten kids have worked their way around the printed lowercase a, it's time to practice writing it in cursive. Cursive writing, with its rounded letters joined together, is a writer's joy. 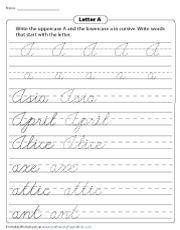 Further Practice for Cursive A

Part of the reason why this cursive A worksheet, you write the capital and small A in cursive and go on to write A words in cursive, deserves a sure place in your repertoire is the importance of cursive writing itself.