Outpace your peers with our printable letter C worksheets and display oodles of pre-reading and pre-writing skills! Prepare preschool and kindergarten kids to recognize the letter C, the uppercase and the lowercase, and say its name. Jam-packed with letter C activities and exercises designed to help the emerging learners instantly nail the letter c, our letter c worksheets pdf teach this letter in a most fun yet studious manner. Trace and color the letter C, refresh everyday words that start with the letter C, and more. Try our free letter C worksheets for a sneak peek into what lies in store. 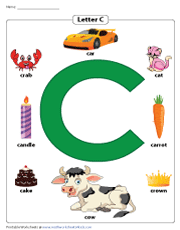 Pull ahead of your fellow learners with this letter C chart, which not only shows the letter C but also introduces several common words starting with the letter C. 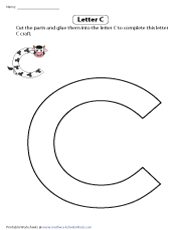 You don't want to miss this C is for cow alphabet cut-and-glue craft, do you? Complete the activity by cutting the several patches and gluing them into the letter C, and watch a heavily laden letter C out and about. 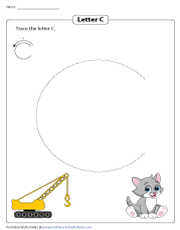 Meet the letter C, the letter that gifts the "cat" its playful nature and gives the "crane" its great strength! Let children take a firm first step in grasping the letter C by tracing the letter in this task from letter C worksheets. 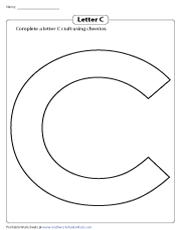 Keep the preschool and kindergarten kids entertained with this making the letter C with cheerios printable! Watch a mouthwatering C up and running after you've placed the cheerios inside. A yummy letter-C activity! 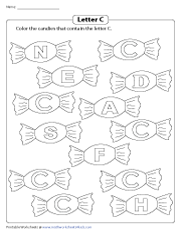 All candies have a letter written on them! Before you unwrap and eat them, be gracious enough to look if there's the letter C and color them if yes. A clue: there are six instances of candies with the letter C. 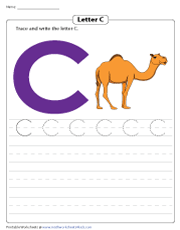 Keep the little hands busy with this uppercase C practice pdf as they go around tracing the letters and visually track what they are doing, creating a stronger bond between the brain and the hands. 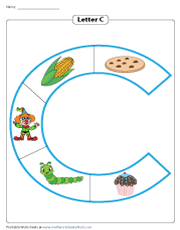 A warm welcome to this lowercase c chart, where the creamy cake and conventional clown, among others, create a unique c learning experience. Each part of the letter c contains a word beginning with the letter C. 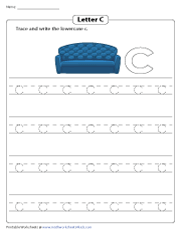 Every instance of the lowercase c that will contribute to the successful completion of this section of our letter C worksheets, tracing, writing, and printing the lowercase C, marks a giant leap in kids' alphabet learning. 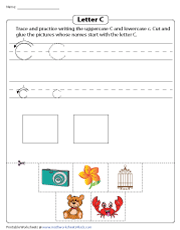 Letters of the alphabet are the foundation on which we build our language and communication, so use our write the uppercase and lowercase C and cut and glue pictures that start with C task for a solid foundation. 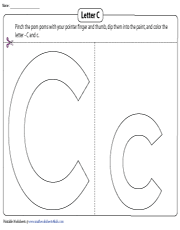 Together the big C and the small c make an awesome twosome! While the capital C is, hands down, the classier of the two, the small c is very chic, as shown in this painting C with pom poms activity printable. 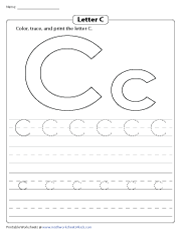 Developmentally, it's far easier for kids to learn the capital C first as the visual form of the capital C is more recognizable. Instruct them to color, trace, and print uppercase C and lowercase c in this worksheet pdf. 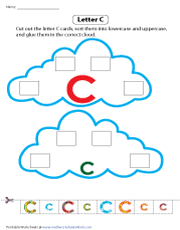 The letter C is a freaky and fascinating blend of beauty, ease, and receptiveness! This letter C activity, where kids cut the Cs, sort them into uppercase and lowercase, and glue them appropriately tells us why. 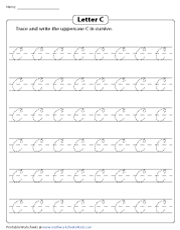 The cursive uppercase C is a display of how exquisite alphabet writing can be! Once you've completed this letter C worksheet, it'll be brimming with Cs so lovely that you can't take eyes off the worksheet. 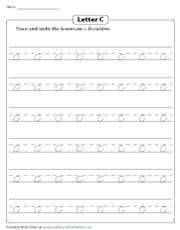 It’s every child’s dream to develop and boast an elegant, legible cursive handwriting style someday! This worksheet, where they go big on cursive C by practicing the cursive letter C, might be the game changer! 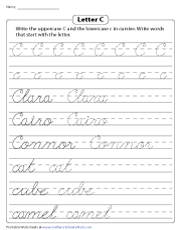 The cursive lowercase c, when mastered after days of industry with our pdf, will be representative of the fantastic progress that preschool and kindergarten children will have made with their letter c practice.