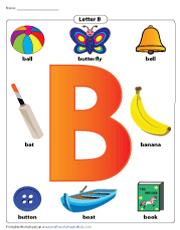 Letter B Chart | Recognizing Letter B

Get your child dancing to the tune of the letter B! Let them get the hang of how the letter B looks like and say aloud names of these pictures, all starting with the letter B. 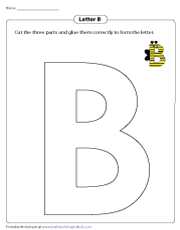 Beat the uppercase B in style! This letter B craft, where kids appropriately put together the given pieces and form the uppercase B is a hoot. The capital B is used at the beginning of a sentence or a proper noun. 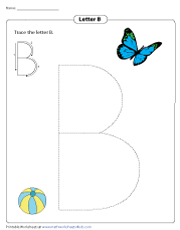 The butterfly and the ball, which are made part of this tracing the letter B activity, are brilliant because the former's vibrant colors and the latter's everyday charm give the letter-B practice a super-sharp edge.

Making Letter B with Buttons

Don't miss this cute, simple, fun fine motor craft thoughtfully designed for preschool and kindergarten kids! Let them place buttons inside the shape of the letter B in an attempt to recognize the letter B. 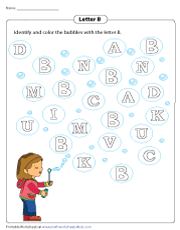 Not many bubbles that the girl in this letter B worksheet is blowing contain the letter B. So the job's easy for children as they comb through a bunch of letters and figure the instances of the letter B and color them.

Tracing and Writing Letter B

Beautiful and breezy, the letter B is a pleasure to color! Get the young learners coloring, tracing, and printing the letter B, in this section of our printable letter B worksheets! 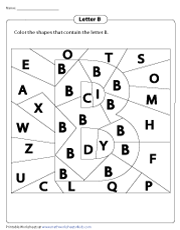 Coloring Bs to Form a Giant B

Watch a team of Bs get together with the intention of giving shape to a huge, a massive or mammoth to be precise, B! The task is to shade the parts that contain the Bs so when the shading is done, the big B is born. 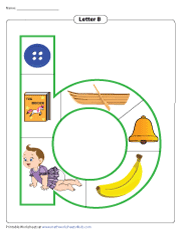 Get off to a rollicking start recognizing and saying the letter B with this b-shaped chart where a number of objects, all starting with the letter B, invite the budding learners to jump from word to word and know the letter. 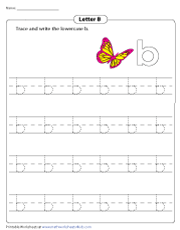 Tracing, Writing, and Printing Lowercase B

The lowercase b is easier to write than the uppercase B. That said, children must gather as much practice as it takes to be able to instantly write this letter, and this writing the lowercase letter B worksheet works well.

Uppercase and Lowercase B 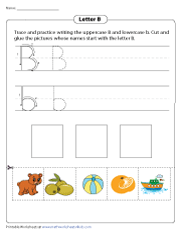 It just takes three strokes to write the uppercase B, and the lowercase b is accomplished with two strokes. Practice this firsthand in this writing the letter B pdf. Cut and glue the pictures, starting with the letter B. 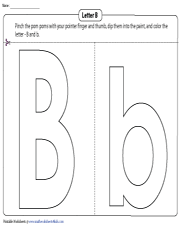 Painting Letter B with Pom Poms

This part of our printable letter B worksheets is worth losing your heart to! Trace and write the letter B, paint the letter with pom poms, and develop fine motor skills in the process. There's a lot more than just the letter B! 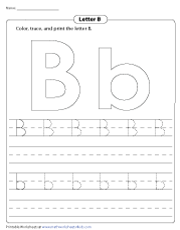 Coloring, Tracing, and Printing Letter B

Boy oh boy, this letter b worksheet is brimming with brio! Children first color the uppercase B and the lowercase b. Then they trace B and b, modeling their act after the capital and small instances of B given. Finally, they print the letter B. The letter B, hands down, is the best letter. 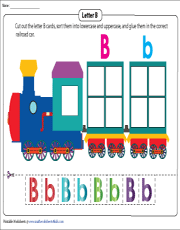 Sorting Uppercase and Lowercase B | Cut and Glue

Flit between the prospect of enjoying the sight of a spellbinding train and the promise of sorting the letter B into uppercase and lowercase in this task from our letter B activities for preschool and kindergarten. 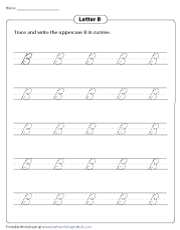 Mastering the uppercase, cursive B is an art! Give the B-fascinated children scads of practice so they keep at it and perfect this art, as they complete this letter B pdf worksheet by tracing the uppercase cursive B. 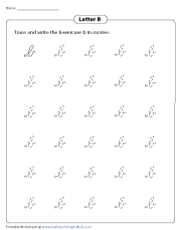 Ratchet up the letter-b excitement by learning how to write the lowercase b in cursive! Instruct children to complete this letter B writing exercise so nothing will hinder their cursive lowercase b from looking perfect. 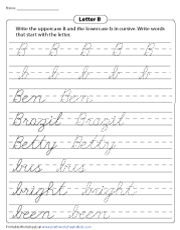 Further Practice for Cursive B

Attend the cursive party this resource has in store for you! Before you write letter B nouns, proper nouns first and common nouns next, in cursive, do prepare the ground by writing the two Bs in cursive.