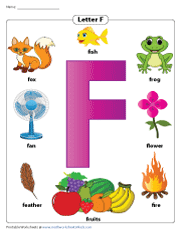 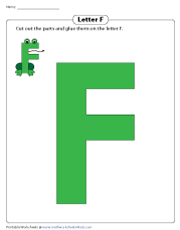 The frog very well resonates with the transformation and prosperity that children are hopeful of achieving with their letter F practice. Cut the bits and pieces on the next page, glue them into the F, and leap ahead. 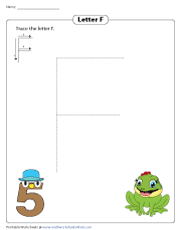 Witness the magic of preschool and kindergarten children flowering into full-blown F men! Achieve this fine feat by tracing the letter F and saying hello to a frog and the number five, both instances of F. 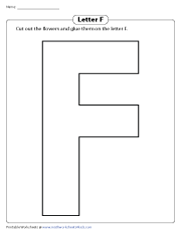 The f-learning cachet that lies in flowers is simply inexhaustible! Watch flowers in charge yet again and inspire another pleasant letter f practice, as children glue flowers into the letter F to complete this letter F craft. 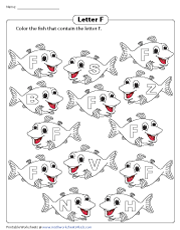 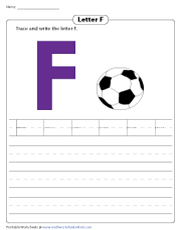 What makes this part of our letter F worksheets a firm favorite for kids is that it's fueled by "F is for football"! As your face lights up with the joy of football, make the most of the happy moment by writing the letter F. 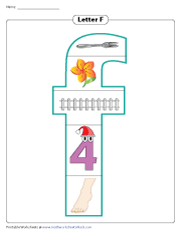 This letter F chart is particularly impressive as it has an elegant f that not only captures kids' imagination with its composed look but is a wonder to behold. The fork, flower, fence, four, and foot renew kids' interest in F. 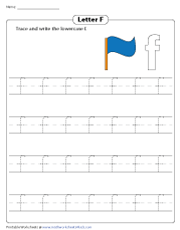 Welcome kids to a world of opportunities within and beyond the letter F. Prepare them to write F; let them start at the top, go around and downward to the bottom, and make a line across at the middle. 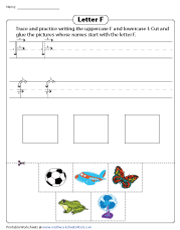 Support students’ cognitive development and overall achievement with this 2-part letter F pdf. First, trace and write the uppercase and lowercase F. Then, cut and glue the pictures that start with the letter F. 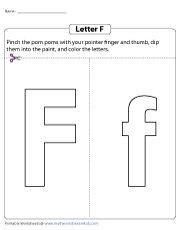 With this pom-pom craft around, all other letter F plans will fly out of the window! Nail the task by using your pointer finger and thumb to pinch the pom poms and paint the capital F and the small f with them. 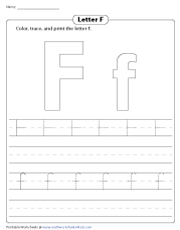 The words "fish", "finger", "fan" are a good reminder that the letter F is not at all a foreign phenomenon! Flash your fondness for F by coloring, tracing, and printing the uppercase the lowercase F in this printable. 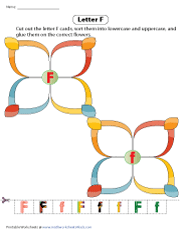 Here's a "Flower", named after the uppercase F and a "flower", after the lowercase f! Observe the letter F cards given, sort them into uppercase and lowercase, and glue them into the appropriate flower. 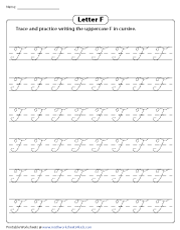 A foundational skill that continues to be relevant even when we have technology at our fingertips, cursive writing must be mastered if kids want to go a long way. So gear up by writing the uppercase F in cursive. 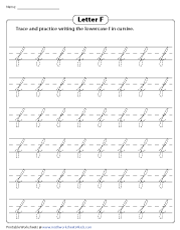 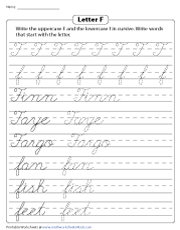 If you’re keen to improve your cursive skills, you’ll find this resource the best thing since sliced bread! Not only do you write the letter F, only the letter, in cursive, you also write letter-F words in cursive.