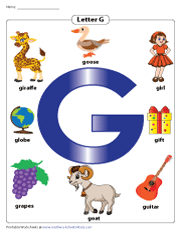 Make the most of the G in words like giraffe, goose, girl, globe, and more in this chart, as a good guide for children to utilize and build their letter G prowess with. Get the feeling of both the soft and hard G. 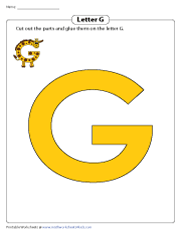 Making a Giraffe from G | Craft

Help form a giraffe-like G by cutting and gluing the parts on the next page. Point out to children that "giraffe" is an excellent example of the letter G as they complete this printable letter G worksheet. 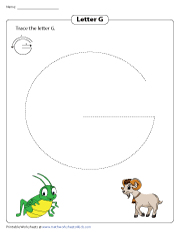 Feed the practice-hungry kids with this tracing the letter G pdf! To write the uppercase G, start below the top and go all the way around to the middle. When the task's over, take a moment to greet the grasshopper. 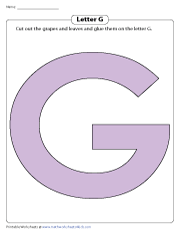 Squeeze the grapes and take advantage of every bit of letter G practice that they abound in! Pay tribute to the grapes by using them to put together a luscious letter G in this sweet activity, a letter G craft. 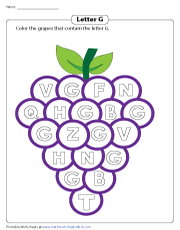 A genuine game-changer, this bunch of grapes equips children with the skill of identifying the letter G in a fun way. What kids are tasked with doing is examining the grapes and coloring those that have the letter G. 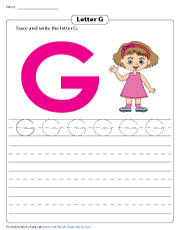 Watch a little girl gleefully flaunt the letter G as preschool and kindergarten children identify and write the letter G! Refresh the instruction on how to write the uppercase G and achieve the task. 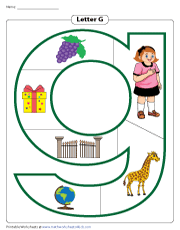 The shift from nascent learners to grandstanding letter G practitioners is not entirely devoid of hurdles, but this printable letter G chart, replete with letter G words, makes the ride feel smooth. 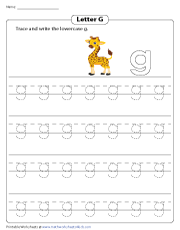 Here's how to write the lowercase g. First start in the middle and then go all the way around. Return to the middle and go downward and around to the bottom. Writing g is an art children love perfecting! 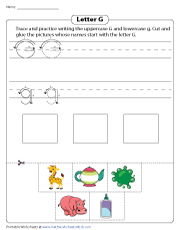 In order for children to learn to write and identify the letter G, they should be taught these skills along a continuum. In this letter G worksheet, write the uppercase and lowercase G and cut and glue the pictures starting with G.

Pick up a pack of pom poms because to nail this letter G activity, you need one. As stunning as G and g are, they look even more so when you color them with pom poms in this printable letter G worksheet. 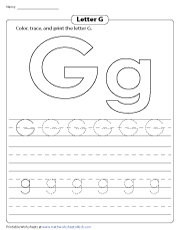 At the heart of this letter G printable is a gorgeous G and a gracious g, together introducing preschool and kindergarten children to a coloring and tracing letter G activity. Trace the letter on the lines provided. 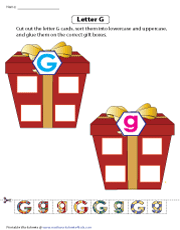 A best match to meet the requirements of telling the uppercase G apart from the lowercase g, this pdf from our letter worksheets has preschool and kindergarten children cutting and gluing big and small Gs correctly. 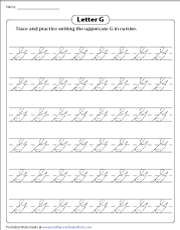 Not only is teaching children cursive leaning into nostalgia, it's helping them acquire a much-needed skill prerequisite for making the learning journey easy. Push-start writing uppercase G in cursive in this pdf.

Take your time, as little as a week or as long as a month or even longer, but be sure you are well-versed with writing the letter G in lowercase cursive. Get children angling for greatness in writing g in cursive! 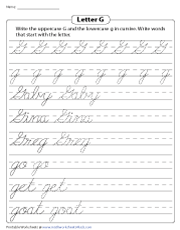 Let your cursive G practice thrive with the best and the most prolific cursive worksheet from this collection of letter G worksheets. Give yourself an exciting cursive experience by writing the letter G in cursive.