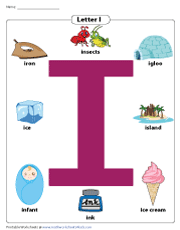 Letter I Chart | Recognizing Letter I

Lean on this letter I chart to provide you with an instant collection of everyday letter I words! Make sense of how the uppercase I and the lowercase i look like, and make headway with ice cream, ink, and more. 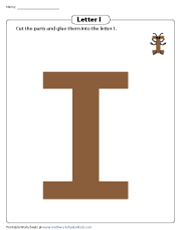 Craft a Letter I Insect

Illuminate the letter I with an incredible insect craft! Enjoy putting together a letter I by cutting and gluing the many parts from the next page. Why do we choose "insect"? Because it starts with the letter I. 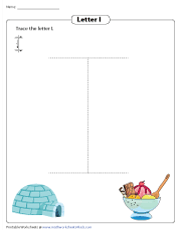 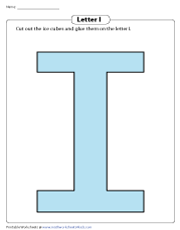 Making Letter I with Ice Cubes

Make your letter I super-cold by putting small blocks of ice into it. As children complete this letter I craft, ask them to first fill the straight line with ice cubes before they put more cubes to make the two lines across. 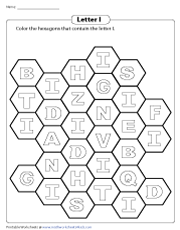 This letter I worksheet is a must-try! Pay tribute to the letter I, the letter that starts igloo and insects, scout out the hexagons in this activity, and color the ones that contain the letter I. 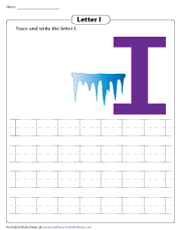 Tracing and Writing Letter I

Explain an icicle to children before you get them tracing and writing the letter I in this worksheet. An icicle is a long pointed stick of ice formed when drops of water freeze. Now the tracing job will be a cinch! 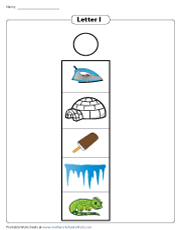 An illustrious embodiment of the letter i, this chart helps children flesh out their letter i practice with more pictures, whose names start with the letter i. The pictures include an iron, an igloo, insects, and more. 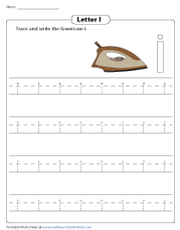 Tracing and Writing Lowercase I

The charm of the lowercase i is as infectious as that of the uppercase I. Show the growing stars how to trace and write the small i. Let them start at the halfway mark, go straight down, and put a dot at the top.

Uppercase and Lowercase I 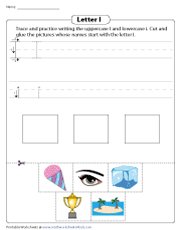 Uppercase and Lowercase I | Cut & Glue

Witness how this prolific printable worksheet helps the letter I practice switch from an engaging process to a catchy affair. Write the uppercase I and the lowercase i. Top that off with a letter I cut-and-glue activity.

Painting Letter I with Pom Poms

Set up this pom-pom activity to make this letter I worksheet a wonderful treat! Direct children to color the uppercase I and the lowercase i with pom poms. A pdf that leaves them craving for more!

Coloring, Tracing, and Printing Letter I

Feast your eyes on the big I and look at the small i with adoration before you go ahead to color, trace, and print the I and i in this printable. This letter I fun will really pick preschool and kindergarten children up! 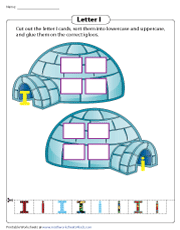 Sorting Uppercase and Lowercase I | Cut and Glue

The I at the entrance to the igloo holds the key. Identify if it's an uppercase I or a lowercase i. Cut the letter I cards below, arrange them into uppercase and lowercase, and glue them on the correct igloos. 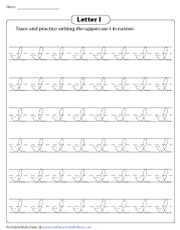 Let the young learners find their feet and settle to write the uppercase I in cursive. Give them step-by-step instructions. Demonstrate the process once or twice so it will be easy for the champs to follow suit. 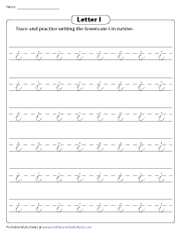 Research has proved cursive writing helps the brain integrate visual and tactile information. So train preschool and kindergarten children to write the letter I in lowercase cursive and excel in this key aspect. 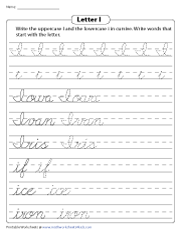 Further Practice in Cursive I