Our printable letter R worksheets are as resplendent as a rainbow and as ravishing as a rose! Watch preschool and kindergarten children vehemently rehearse for success in the letter R, the 18th letter in the English alphabet, using our letter R crafts, activities, and exercises. Instruct the young learners to write, identify, and craft the uppercase R and the lowercase r. There's tremendous practice that feeds into building children's skills in cursive R too. Race past your peers and refresh your R energy on the back of our free letter R worksheet pdfs! 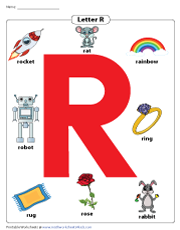 The resounding cheers that will reverberate through the house as you display this letter R chart will be a spectacle to watch! Giving company to a beautiful R are Letter-R pictures like a rocket and a rainbow. 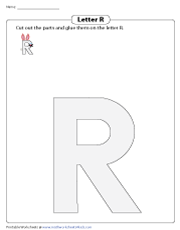 Crafting a Rabbit | Cut and Glue

Children will rave about the rabbit that lends part of its worth to this cut-and-glue craft. They're going to cut the many parts and carefully glue them into the letter R so an amusing rabbit-inspired R craft is complete. 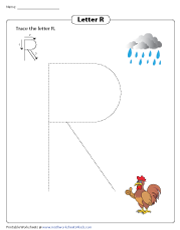 Get the growing stars tracing R to perfection with this letter R worksheet. Tell them to start at the top, draw a straight line downward, return to the top, draw a curved line around, and draw a diagonal line down. 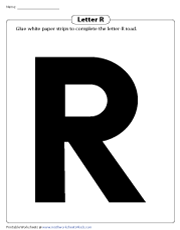 While being a source of fun, this letter R cut-and-glue craft, done with white paper strips cut out and glued on the letter R road, also helps the young R learners get used to the three strokes they'll make to write the letter R. 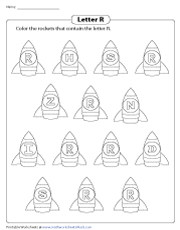 Watch your letter R rocket gracefully arc into the sky of alphabet learning, as you answer this identifying letter R task. Many rockets in this pdf have the letter R; the job's to identify and color all such rockets. 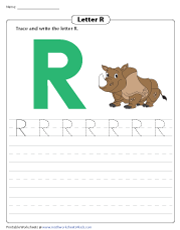 Experience the safari thrill of seeing a rhino unexpectedly lumber into your view in this section of our letter R activities, where you keenly observe the R model given, to trace and write the letter R. 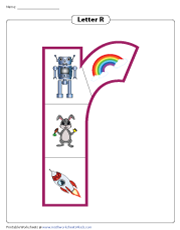 Watch how many letter-R pictures are vying for your attention in this printable chart! Thanks to the fast-moving rocket, the ready-to-act robot, and the happy-to-gorge on-a-carrot rabbit, this chart is an R delight. 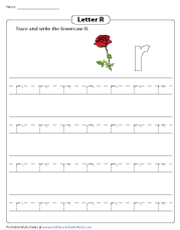 The rose radiates all the relish and rapture associated with the letter R. So tracing the lowercase r, by starting in the middle, drawing a line down, and going back and around to the right, is a pleasant affair. 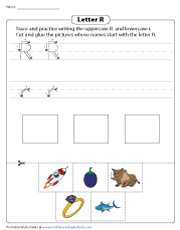 Cruise through the three parts of letter R practice in this section of our letter R worksheets. Get started by writing the uppercase R, pick up speed by writing the lowercase r, and finish with a cut-and-glue activity. 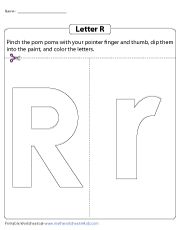 It won't take any persuasion for parents to convince their preschool and kindergarten children to try this exercise. The very idea of coloring the letter R using pom poms will have the tiny tots instantly charged up. 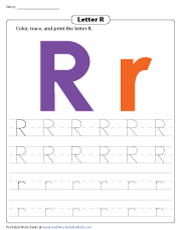 The letter R practice is ready to rock and roll with this letter R worksheet! Be sure to give preschool and kindergarten children instructions on how to trace the uppercase R and the lowercase r. 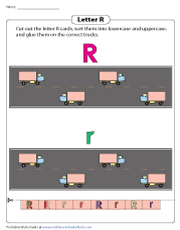 Be proud as kids come of age to separate between the uppercase and lowercase Rs at a glance. Once they've cut the R cards and sorted them into big and small, let them glue as directed in this printable. 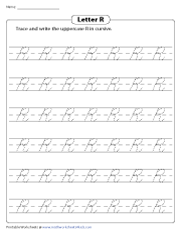 Take your penmanship from decent to great with this cursive exercise, which caters to the uppercase R. Remember, if you practice and develop a particularly good penmanship, you will go a long way. 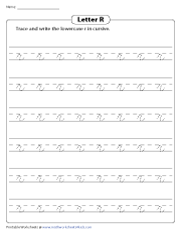 Although ours is a world where everything is digital, cursive writing is important as it stimulates the brain in ways that typing cannot. This writing lowercase r in cursive pdf revives the art of cursive writing. 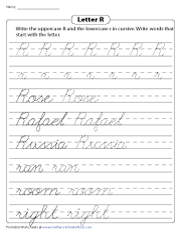 Go full-on perfecting your cursive R! Enhance the skill by first writing the uppercase R in cursive, and up your game by writing the lowercase r in cursive. Better yet, write words starting with R and r- all in cursive.