Tutor the tiny tots using our printable letter T worksheets. With a plethora of activities and crafts sparked off by awesome T words like "tree", "trophy", "tomato", and "train", our letter T worksheet pdfs for preschool and kindergarten children exude t-learning joy in spades. Watch the game go wild when the tiger, the ultimate T word, is in action. The skills include tracing and writing the letter T, identifying the uppercase T and the lowercase t, and crafting the letter T. There's stupendous practice awaiting your kids in our free letter T worksheets. 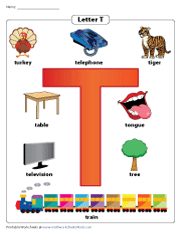 Tell the T tale with a triumph like never before. The tale is told in the form of a wondrous chart that contains a compilation of popular letter T words, such as turtle, turkey, tiger, table, tape, tree, and more. 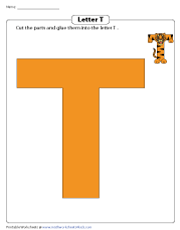 Crafting a Tiger | Cut and Glue

We are thankful to the tiger for being such a sport and teaching us what the letter T feels like. Cut the parts and glue them into the letter T to unravel a determined and strong tiger. An insanely fun letter T craft! 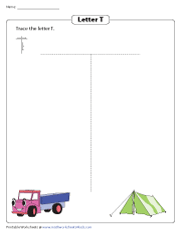 Prepare the growing stars to trace the letter T. Draw a straight line down starting at the top; return to the top to draw a line across the top. Fresh from tracing, they'll be welcomed by a truck and tent, both T words. 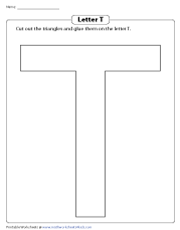 The word "triangle" lets preschool and kindergarten children ease into and say the letter T with all its beauty. Get them scooping up triangles and filling them in the letter T until they craft a towering letter T. 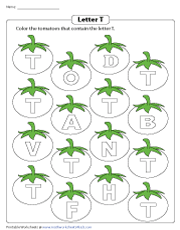 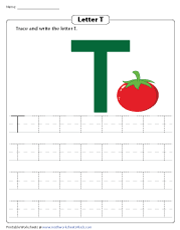 Think of a juicy tomato as you trace and write the letter T in this letter T pdf worksheet so the process won't feel tiresome. Pay attention to the letter T given, and trace the letter as perfectly as you can. 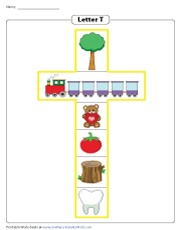 Tackle the letter t with a handful of letter T pictures. This printable letter T chart, with six pictures the names of all of which starting with P, is a terrific T resource that will instantly transform children into T enthusiasts. 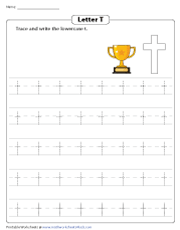 Reminiscent of a trophy, a golden one, the small t is mastered with tons of writing practice. To write the lowercase t, draw a line downward from a little above the middle. Return to the middle and draw a line across. 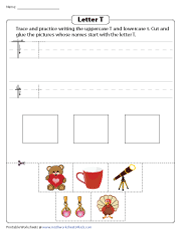 Add this 3-part exercise to your T care regime so writing the uppercase and the lowercase T won't be a Herculean task anymore. When the writing practice is over, relax by cutting and gluing the pictures with T. 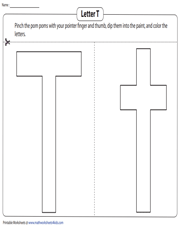 That this pdf from our letter T worksheets has pom poms perking it up will get preschool and kindergarten children gravitating toward it. The child prodigies will relish this coloring letter T with pom poms fun. 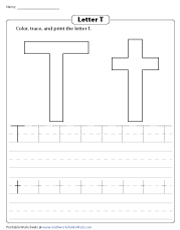 Tune the letter T to fit around your writing needs. A stepping stone to accomplishing the T tasks is to start coloring, tracing, and printing the letter, as in this letter T worksheet for preschool and kindergarten kids. 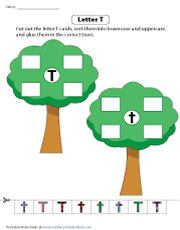 The letter T cards are desperate to go where they belong. Identify if each card has a large T or a little t and sort it accordingly. Show such flair for separating between the two Ts that your peers are blown away. 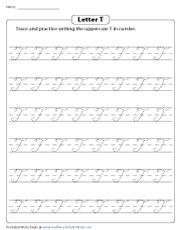 A great cursive penmanship is characteristic of children whose excitement is fired by a desire to excel not only in their academics but also in their life, so we suggest that you try this uppercase T in cursive task. 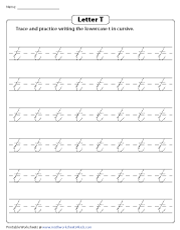 Whether it's to become a better speller or to gain improved reading skills, cursive writing is your go-to tool. Here, write the lowercase t in cursive in an attempt to hit the height of cursive excellence. 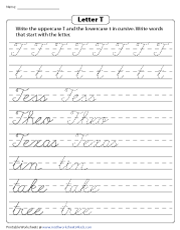 Bring the young ones some riveting cursive practice with this letter T printable. Let them write the uppercase T and lowercase t in cursive. Amp up the practice by writing in cursive words that start with T and t.