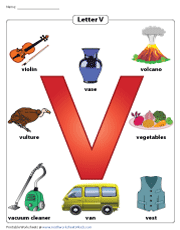 Play the V violin with great expression, and make a habit of eating a lot of V vegetables. Wherever you cast your eyes in this letter-V chart, there are pictures whose names start with the 22nd letter in the English alphabet. 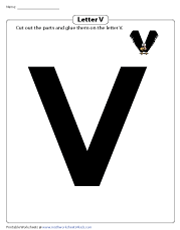 Crafting a Vulture | Cut and Glue

A vulture may be excused for having almost no feathers on its head or neck, for it's such a huge example of the letter V. To complete this V craft, cut the parts of the bald vulture and glue them on the letter V. 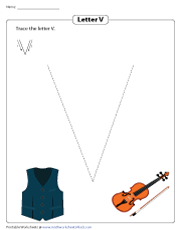 Here's how preschool and kindergarten children can trace the letter V. Instruct them to follow the arrow marks and draw two slanting lines meeting at center to construct the letter V without any hassle. 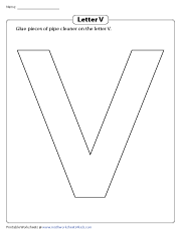 Here's an opportunity for the magnetic, charismatic children to vaunt their letter-V crafting skills. Direct them to glue the pipe cleaners and complete this letter V craft. Crafting V has never been more fun! 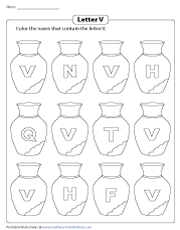 A vase of letter V is newsworthy, isn't it? Stir up passion and excitement with this part of our letter V worksheets, where children identify the letter V. Task the little stars with coloring each vase the holds the letter V. 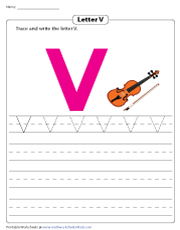 This letter V worksheet is a high-wire violin concerto! As you enjoy playing the violin, trace and write the letter V. Follow the instructions of tracing the letter V, and complete this segment of our letter V activities. 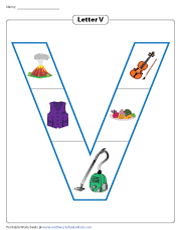 Watch your letter-V practice vegetate with a printable chart! With several letter-V pictures, with vegetables as their cynosure, this chart is highly calorific. Grab this tool right away and print its several copies. 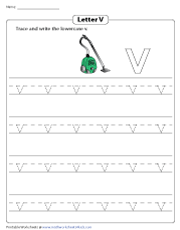 Keep preschool and kindergarten children fed with whatever letter V resource they can lay their hands on. Let this worksheet, teeming with practice in writing the lowercase v in cursive, be the next on the list. 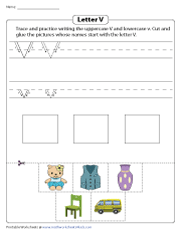 The word "van" starts with V, but the word "chair" doesn't. Cut and glue the pictures that start with the letter V. Before you embark on the cut-and-glue activity, do practice writing the capital and small V. 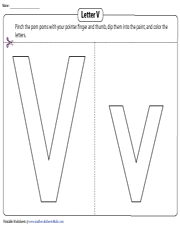 How would it feel if children could enhance their letter-V practice, develop fine-motor skills, and display their love for painting - all at once? It would feel like this letter V coloring, which is done using pom poms. 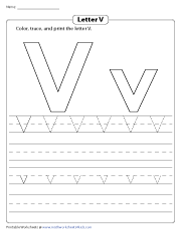 On every line, there's room for six Vs, making this exercise on coloring, tracing, and printing the letter V quite a promise. Color, trace, and paint the uppercase V and the lowercase v. An activity not to be missed! 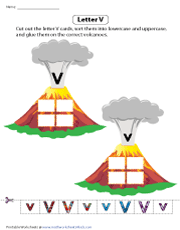 There are two active volcanoes in this pdf: one for the uppercase V and the other for the lowercase v. Look at the letter V cards, identify if they are lowercase or uppercase, and glue them on the appropriate volcanoes. 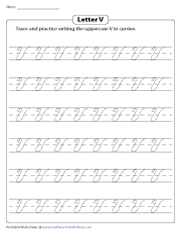 One of the benefits of cursive handwriting is it diminishes potential for errors. An art that veers from fun to challenging, mastery in cursive is a must-have for children, hence this pdf on writing uppercase V in cursive. 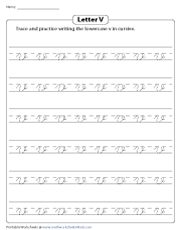 Enjoy scads of cursive joy with this exercise from our letter V worksheets. Make your cursive life richer and more fulfilling by learning and practicing how to write the lowercase v in cursive, at an easy pace. 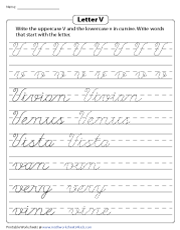 This printable letter V worksheet for preschool and kindergarten kids is cursive-V practice at its most generous. Write the capital and small V in cursive. Write words, starting with V, in cursive.