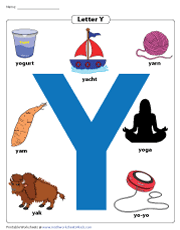 Eat lots of yogurt, for it's high in protein. It's a letter Y word, too. Dream of cruising on a yacht someday. Remember "yacht" starts with a Y, too. This letter Y chart has many exciting pictures and their letter-Y names. 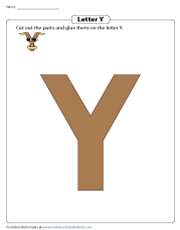 Crafting a Yak | Cut and Glue

If you have a fascination for crafting letters, this letter Y activity might capture your imagination. The task is to cut out the several parts on the following page and glue them on the letter Y to complete the Y craft. 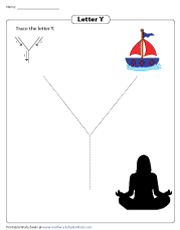 Ask children to observe the Y at the top left of the page, honing in on the arrows, marked 1, 2, and 3 as they trace the letter Y. As beautiful as the yacht is, don't let it distract attention from the tracing act. 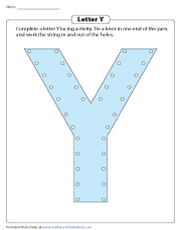 Here's a printable Y activity to boost preschool and kindergarten children's fine motor skills. Direct them to do the hole punching and the lacing. Tie a knot in one end of the shoe lace, and they are ready to go. 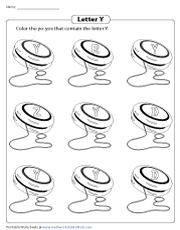 Yo-yos, toys containing a circle-shaped object that will go up and down a long piece of string it is tied to, are simply stunning. More stunning, though, is this worksheet on identifying and coloring yo-yos that consist of a letter Y. 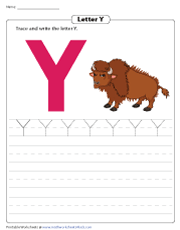 While a yak may be found in Central Asia, the word "yak" has a universal appeal for its letter-Y learning cachet. The stocky, long-haired wild ox in this tracing and writing the letter Y pdf is enormous. 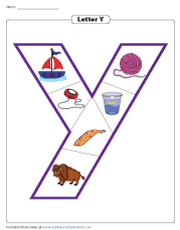 The infectious sense of wonder that surrounds the "yarn" and "yam", both letter Y words, will soon spread to the rest of the words/pictures, too. Watch the letter-Y excitement come thicker and faster. 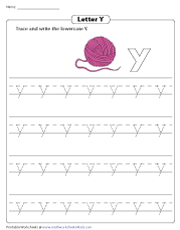 Since handwriting enjoys paramount importance in literacy and is a crucial skill that leads to success in life, children must be trained on tracing, hence this task on tracing and writing the lowercase y. 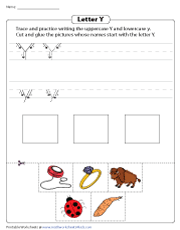 Flip between the learning in writing the letter Y and the pleasure of cutting and gluing pictures that start with the letter Y in this letter Y resource, exclusively prepared for preschool and kindergarten children. 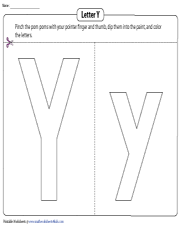 For some children, coloring is a simple pastime, but for some it's nothing short of a devotional act. Whichever category you belong to, you will have a great time painting the letter Y using pom poms. 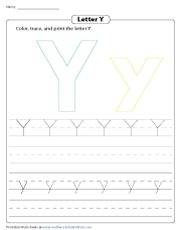 Say yes to this letter Y worksheet, where you are asked to color, trace, and print the letter Y. First up is coloring the two Ys- the uppercase Y and the lowercase y. Go on to do the tracing and printing. 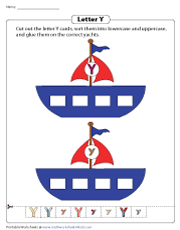 Clamoring for your attention in this letter Y worksheet pdf are four capital Y cards and four small Y cards. Identify the uppercase Ys and the lowercase ys, and glue them according to the instruction given. 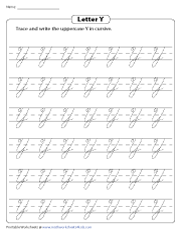 Cursive handwriting works like magic for children who encounter difficulties in spelling and struggle while decoding writing patterns. So instruct learners to start practicing writing the uppercase Y in cursive. 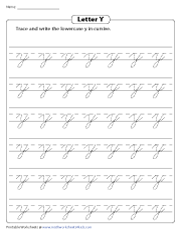 It is astonishing to see how the uninterrupted movements of the hand make cursive letters easier for children to form. Our worksheet on writing the lowercase y in cursive encourages kids to go cursive early. 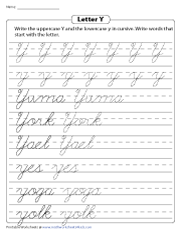 The reason why this printable letter Y worksheet for preschool and kindergarten children is teeming with cursive practice is, hands down, the constantly increasing importance of cursive writing at school and in life.