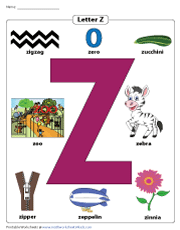 A zucchini is a vegetable that nutritiously contains the letter Z. A zeppelin is a large airship that ambitiously flaunts the letter Z. Then there is the zinnia and other words that start with Z in this chart. 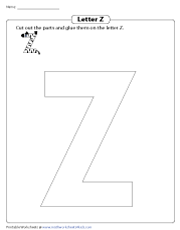 Crafting a Zebra | Cut and Glue

What is the concept of utter joy for you? This cut-and-glue activity is a source of immeasurable delight as it gets you sitting down and crafting a zebra from the letter Z by cutting out the parts and gluing them on the letter Z. 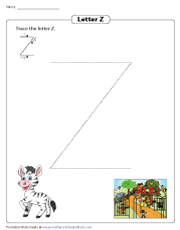 Demonstrate to the child how to properly hold the pencil as they trace and form the letter Z. Let them read the directions carefully and complete the task. They need to make three strokes to trace the letter Z. 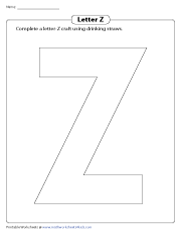 When you have a number of drinking straws eagerly bunch up together and make their way into the letter Z, they not only let you elegantly craft Z, they also transport you into a different world of alphabet learning. 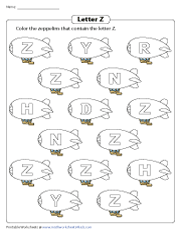 The many zeppelins, some of which containing the letter Z and some not, in this activity will magnetically draw preschool and kindergarten children to this task, where they color the zeppelins with the letter Z. 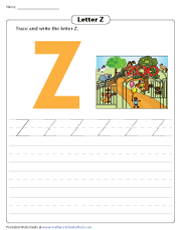 Just as youngsters will easily gravitate toward a zoo, one of their favorite free-time destinations and a pleasure-to-remember letter Z word, they will enjoy tracing and writing Z in this pdf from our letter Z worksheets. 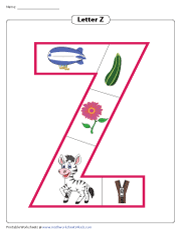 The letter Z will resonate with the child in many ways. Whether it's the zipper that they use to close openings in clothing or the zucchini they eat to increase their vitamin uptake, the letter Z is never too far away. 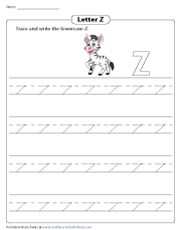 The zebra is striped, lovely, and young. Better yet, the zebra is a wild member of the letter Z family, making the animal an excellent choice to present this printable exercise on tracing and writing the lowercase Z. 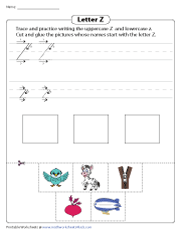 Out of the five pictures given, three are examples of words that start with the letter Z. Cut these and glue them as instructed. Complete the cut-and-glue job only after you have finished writing the letter Z. 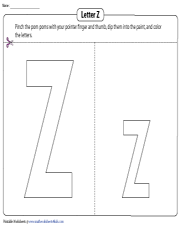 Provide preschool and kindergarten children a welcome art break with pom poms. Direct them to pinch the pom poms, to dip them into the paint, and to color the two letters: the uppercase Z and the lowercase z. 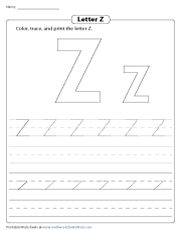 The young learners will fondly remember the first time they color the letter Z. Let this worksheet mark their first memorable encounter with coloring, tracing, and printing the letter Z, in uppercase and lowercase. 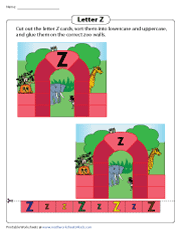 This pdf cut-and-glue task is proof that our letter Z activities are as recreational as they are educational. Observe the letter Z cards, identify and sort them into capital and small Zs, and glue them as asked. 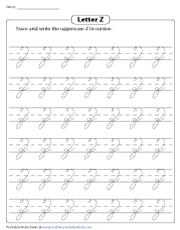 In order for kids to fully understand the English language and to connect words to their motor memory, they must learn cursive handwriting. So they should be fairly good at writing the uppercase Z in cursive, too. 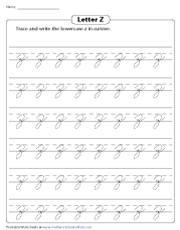 Put your writing in cursive mode by learning to write the lowercase z in cursive. Remember cursive is as beneficial to the brain as playing a musical instrument. It makes children smarter and more intelligent. 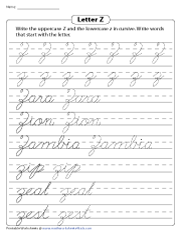 If you want to effect a meteoric growth in students' cognitive and visual skills, this printable cursive Z exercise from our letter Z worksheets will be at the forefront of the resources considered worth exploring.